Posted by Unknown at 6:05 PM No comments:

To avoid the disease of industrial scholarship -- mass-produced scholarship to satisfy the demands of employers and the appetites of consumers -- it might be a good idea to reinvigorate the the idea that the scholarly life is a quasi-monastic one.
Posted by Unknown at 5:57 PM No comments:

A "No" Will Do -- But Perhaps "Yes" Would Also Pass Muster

I just received the following question via the UAI -- Uncertainty in Artificial Intelligence -- list:

Since I don't fully understand the question, I think I can fairly answer the question with either a "yes" or a "no."
Posted by Unknown at 5:49 PM No comments: 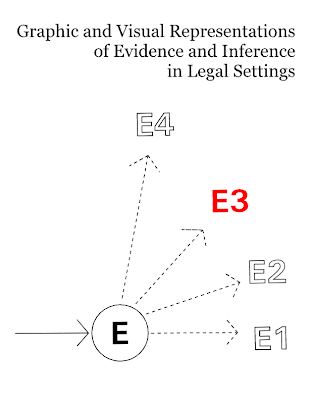 ... but the use of citation counts or GOOGLE hits alone to measure the utility or scholarly merit of legal scholarship warrants the derogatory label "industrial scholarship"...

More on the legal treatise as (influential) legal scholarship:

241 U.S. law journal articles in the LEXIS database have cited volume 1 or volume 1A of WIGMORE ON EVIDENCE (P. Tillers rev. 1983).In GOOGLE the search terms "Wigmore Evidence Tillers" generated 1,140 hits today (but some of these hits are to my blogs and my other online material, and I estimate that 10% of the hits are false positives).

The topic was the "utility of legal scholarship to judges." The discussion initially focused almost exclusively on the utility vel non of law journal articles to judges. But some faculty members began to mention other possible forms of legal scholarship. I was no exception to this partially self-serving attempt to re-direct discussion: I raised the question of views (both outside and inside the legal academy) about the utility of legal treatises. 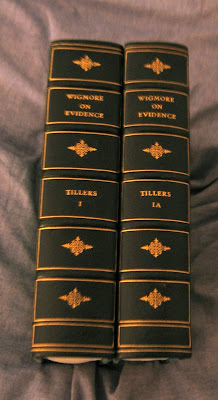 More than two decades ago several prominent law teachers doubted the value of "doctrinal scholarship," including legal treatises. (The doubters were mainly lodged on the right side of the political spectrum and on the left side, but not in the moderate, or mushy, middle.) Earlier on this blog I expressed -- I reiterated -- my opinion that the notion that legal treatises cannot harbor original or creative thought is twaddle. See Platonic Hierarchies of Legal Scholarship.

After the panel discussion with the judges, I had a hallway conversation that moved me to gather some data about the number of times that prominent courts cite to Wigmore's treatise, including my part of the treatise. Here is a bit of the largely self-serving stuff that I found and noted:

There were a total of ca. 1,700 citations to the Wigmore Treatise by all U.S. courts from and including 2000 to the present.

During the same period the Supreme Court of the United States cited to Wigmore's treatise in 17 judicial opinions.

There were 16 citations to Wigmore by the 2nd Circuit from and including 2000.

There were 27 citations to Wigmore by the 9th Circuit from and including 2000.

There were 6 citations to Wigmore by the 5th Circuit.

There were 16 citation by the 4th Circuit.

There were 15 citations by the 1st Circuit.

So (as might have been expected) there is substantial variation among the circuits in the frequency to citations to Wigmore.

There were 9 citations by the NY Court of Appeals in the same period.

In all New York state courts there were ca. 55 citations to Wigmore (but in this instance I didn’t check for false hits).

83 Supreme Court briefs cited to Wigmore during the same period.

Westlaw’s database contains 9,428 appellate briefs around the country that cited to Wigmore during the same period (but I didn’t check for false positives).

WESTLAW shows 337 appellate briefs in New York that cited to Wigmore during the same period.

The High Court of Australia has cited my volumes six (6) times.

The Supreme Court of Canada has cited my revision seven (7) times. Id.

The Constitutional Court of the Republic of South Africa cited my revision once.Id.

For citations by U.S. Courts of Appeals and by the highest courts of the States of the United States, please see Selected Judicial Citations to vols. 1 & 1A J. Wigmore, Evidence (P. Tillers rev. 1983)

Are "blawgs" -- law blogs -- legal scholarship? Can they be? There was very recently a panel discussion about legal scholarship at my law school. One discussant mentioned blawgs. But there was no discussion of the scholarly standing ofblawgs. (The talk was almost entirely about law journals.) In the blogosphere there is considerable discussion about the scholarly status of blawgs. See, e.g., Blogs: Scholarship (with links) at ProfessorBainbridge.com (a blawg).

It is a fair guess that bloggers have a more favorable opinion of blawgs than non-bloggers do.

It is true that the panel discussion at my law school lasted only ca. 90 minutes. Hence, there was not much time to talk. Nonetheless, the decision to talk almost exclusively about law journal articles and not at all about blogs is some evidence of the scholarly standing (or non-standing) of blawgs.

But blawgs are a recent development. Views about them will change. But precisely how they will change, I do not know -- and, at the moment, I won't venture to guess.

Legal scholars -- but the phrase is perhaps presumptuous -- love to talk and write about legal scholarship. That's partly because they love to talk about themselves. That's partly because they are narcissistic. (And that makes them solipsistic.) Considerations such as these -- and others (e.g., my insecurity about the value of my own scholarship, fear of the scorn of others, fear of retaliation) -- have made me hesitate to talk and write very much about legal scholarship -- its condition, its prospects, its purposes, etc. But now that my academic credentials seem to be reasonably well established, it's time that I speak out about legal scholarship a bit more frequently and a bit more frankly than I have in the past. Inevitably, many of my remarks will be self-serving. But I will do my best to make my comments be of some interest to someone other than myself. Moreover, I promise that some of my comments will have a contrarian tone. But this post is just an opening salvo: it is only an announcement of my intentions. Later posts will be substantive.

N.B. I may have made a kind of promise. But caveat emptor: the promise I have made here is not enforceable. Do not rely on any assurance given here that I will comment on legal scholarship. I may change my mind.

What sorts of matters will I discuss? I'm not sure. But here are some possibilities:

3. Legal scholarship -- in and out of the academy

10. Legal scholarship and the rule of law

You will forgive me, I hope, if many of my forthcoming ruminations are suffused by notions that I have acquired over the years as a result of my study of evidence, inference, and uncertainty about (and in) the world. (But not all of my thoughts are the result of this sort of preoccupation.)
Posted by Unknown at 3:54 AM No comments:

An Innocent(?) Man on Death Row in Japan for Forty Years

Different people may be shocked by the below story for different reasons.

Some people may be principally revolted by the possibility that an innocent man has been imprisoned for four decades.

Other people may be shocked to learn that a prisoner has had to face the prospect of execution for forty years.

The truth, of course, is that both things are appalling.

One of the three Shizuoka District Court judges who in 1968 sentenced a pro boxer to hang for four murders said Friday he thought at the time the man was innocent.

The judge, Norimichi Kumamoto, 69, said he agreed to the death sentence after the two other judges involved in the case made the decision, despite having prepared a 360-page document citing reasons supporting the man's innocence.

Kumamoto, who resigned from the bench shortly after agreeing to the sentence, made the remark the day before the 71st birthday of Iwao Hakamada, who has been on death row for over 40 years, during which time he has sought a retrial for the murder of a family of four Shimizu in June 1966.

Posted by Unknown at 2:51 AM No comments: