When Guilt or Innocence Hangs on a Hair

Recently I blogged on the disturbing case(s) of Steven Avery: When Chances Collide; DNA & "Exoneration"; Suggestibility & Gullibility (Nov. 12, 2005) and More about Steven Avery (Nov. 13, 2005). Steven Avery is the Wisconsin man who (i) is now charged with the murder of Teresa Halbach in 2005 (just a few weeks ago), (ii) was convicted in 1985 for the rape and attempted murder of Penny Beerntsen earlier that year, and (iii) was officially exonerated in 2003 of the rape and attempted murder of Beernsten in 1985.

I cannot answer this question; I do not know the evidence in either case well enough. But it is pertinent to note that Avery's exoneration of the 1985 rape and attempted murder rested -- so newspaper accounts suggest -- on a single hair. See Michelle Kubitz, Avery One Year Later, Herald Times Reporter (September 10, 2004):

Sept. 10, 2003: State Crime Lab tests on 13 hairs recovered from the victim [Penny Beerntsen] at the crime scene indicates that one [emphasis added by P. Tillers] of them did not match Avery's. That sample of DNA matches that of Wisconsin inmate Gregory Allen, who is serving a 60-year sentence for a different sexual assault in Brown County.

Question: If Steven Avery did indeed rape and try to kill Beernsten, how did one of Gregory Allen's hairs end up on Penny Beernsten?

I surely don't know the answer. But, as I suggested in one of my earlier posts, one possibility should be investigated. Newspaper reports suggest that in 1985 Steven Avery and Gregory Allen lived in the same area or neighborhood. If that is the case, it might be useful to know (i) whether Avery and Allen knew each other in 1985; (ii) if they did, whether they spent time together in 1985 or whether they were perhaps even close chums; and (iii) if they did spend time with each other and were acquaintances in 1985, whether they engaged in activities (e.g., touch football games, other physical horseplay with each other, joint hunting trips, sitting on the same couch in Avery's house or Allen's house) that might have resulted in the transfer of one of Allen's hairs to Avery or to Avery's clothing. 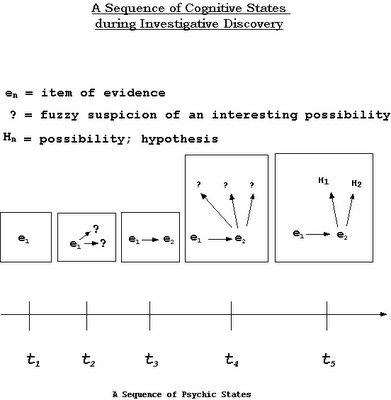 There is a considerable body of law, much of it dating from the 1980s, about the question of the admissibility or inadmissibility of the testimony of witnesses who have (allegedly) been hypnotized. A recent article in the New York Times describes recent studies of hypnosis by neuroscientists. See Sandra Blakeslee,This Is Your Brain Under Hypnosis, in SCIENCE, NYTimes Online (Nov. 22, 2005). One of the major conclusions of these recent studies parallels the general conclusion of many earlier studies of human perception and human memory: the mind is not a tabula rasa; the mind constitutes, or creates, perceptions (or conclusions based on perceptions) from the sensory signals that are fed into the human brain and the human organism. But there are important differences in detail between the older and newer studies of perception -- there are differences in theories about precisely how the brain processes sensory data and converts them into perceptions -- and the article describes some of the mechanisms that are, it is now thought, in play.

Some of the recent studies described in the article involve the study of the brain activity during hypnosis. According to some current neuroscientific theory, "top-down" processing is very important in the brain's interpretation of sensory inputs:

One area that it may have illuminated is the processing of sensory data. Information from the eyes, ears and body is carried to primary sensory regions in the brain. From there, it is carried to so-called higher regions where interpretation occurs.

For example, photons bouncing off a flower first reach the eye, where they are turned into a pattern that is sent to the primary visual cortex. There, the rough shape of the flower is recognized. The pattern is next sent to a higher - in terms of function - region, where color is recognized, and then to a higher region, where the flower's identity is encoded along with other knowledge about the particular bloom.

The same processing stream, from lower to higher regions, exists for sounds, touch and other sensory information. Researchers call this direction of flow feedforward. As raw sensory data is carried to a part of the brain that creates a comprehensible, conscious impression, the data is moving from bottom to top.

Bundles of nerve cells dedicated to each sense carry sensory information. The surprise is the amount of traffic the other way, from top to bottom, called feedback. There are 10 times as many nerve fibers carrying information down as there are carrying it up.

These extensive feedback circuits mean that consciousness, what people see, hear, feel and believe, is based on what neuroscientists call "top down processing." What you see is not always what you get, because what you see depends on a framework built by experience that stands ready to interpret the raw information - as a flower or a hammer or a face.

Some of the studies described in the NYTimes article show that such top-down processing can be so powerful that it can make a human beings "see" the color red when in fact some other color is plainly before the human actor's eyes. This sort of one finding is one reason why students of the law of evidence should be interested in these recent neuroscientific studies. Such studies may have a bearing on controversies about the appropriate treatment of witnesses who have been hypnotized. But the studies may also have implications for the more general question of the "suggestibility" of witnesses and the implantation or development of false memories and beliefs. However, as always, whether such studies have any immediate practical implications depends very much on the details. The mere insight that the human mind is an active participant in perception -- like the insight, or conclusion, that expectations are capable of altering or falsifying perceptions (or conclusions based on perception) -- is not new. One needs to know, for example, under what circumstances various kinds of changes in (conclusions based on) perceptions occur, what the magnitude of such changes is, and so on.

There is more in the article -- much more. I strongly suggest you read it -- and then dip into further literature in this area.

AI (Computational Intelligence) and Law -- AI of the Uncertain Variety, That Is -- Should Not Be a Fad 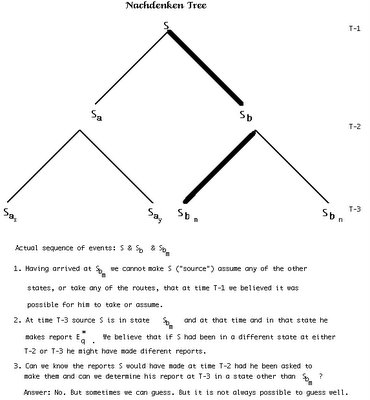 The meaning of legal rules -- such as rules of evidence -- depends only in part, but in essential part on how such rules work. To wit: You do not know the meaning of a legal rule of evidence unless and until you know how the rule works and the consequences that the rule (in its environment) produces. Given this, law professors should be devoting massive amounts of energy to study of scholarship in artificial intelligence a/k/a computational intelligence.

I reiterate this preachy conclusion only because a recent UAI list call for papers [CFP] caught my eye and because this CFP, like many other UAI CFPs, reminded me of how little we law teachers (and, very probably, law and economics scholars) know about the meaning and workings of legal rules. [UAI is the acronym for "Uncertainty in Artificial Intelligence."] Take a gander at these extracts from a CFP for a forthcoming (May 8 & 9, 2006) program of CLIMA VII, Seventh International Workshop on Computational Logic in Multi-Agent Systems, at Future University, Hakodate, Japan, http://www.fun.ac.jp/aamas2006/:

Multi-Agent Systems are communities of problem-solving entities that can perceive and act upon their environment to achieve their individual goals as well as joint goals. ...

Computational logic provides a well-defined, general, and rigorous framework for studying syntax, semantics and procedures for various tasks by individual agents, as well as interaction amongst agents in multi-agent systems ....

The process of litigation and proof involves "multiple agents", such agents (lawyers, clients, judges, other actors) are "problem-solving entities", such agents "can perceive and act upon their environment", they can act to "achieve ... individual as well as joint goals." 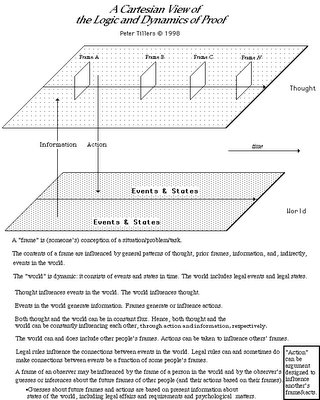 Consider for a moment some of kinds of methods that are used to try to decipher multi-agent systems:

Does the above list of topics suggest that legal scholars have something to learn from their brothers and sisters in computational intelligence and allied fields?

BTW, some law & economics literature seems determined to talk about decision but not about inference. Isn't this is a fundamental mistake? If some of the actors or agents in the environment that one wishes to understand and explain have inferential mechanisms or processes in their souls, isn't it clear that the behavior of such agents ordinarily cannot be predicted well if little or no account is taken of the agents' inferential processes? (And please note, you law & economics folk: those inferential mechanism and processes are extraordinarily complicated, and simplifying such processes "for the sake of argument" is often unjustified.)

Posted by Unknown at 1:38 PM No comments: