Latvia now has a population of ca. 2.2 million. In the last week this blog had the following number of visitors from the following countries: 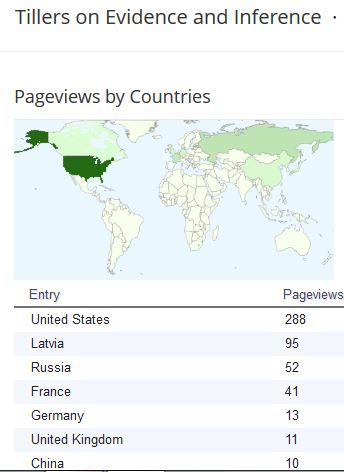 
Scott Shane, Documents Detail [Exceptions to]  Restrictions on N.S.A. Surveillance, NYTimes (June 20, 2013):
“Nobody is listening to your telephone calls,” Mr. Obama said when the news broke.
But as experts on American intelligence knew, that was not the whole story. It left out what N.S.A. officials have long called “incidental” collection of Americans’ calls and e-mails — the routine capture of Americans’ communications in the process of targeting foreign communications.

Posted by Unknown at 7:29 AM No comments:

Email ThisBlogThis!Share to TwitterShare to FacebookShare to Pinterest
Labels: exceptions to restrictions on domestic surveillance

It is generally believed -- and I believe -- that the mind does not work like a tape recorder and that memories are "constructed."

Does it follow that all memories -- which are constructed, or assembled, by the mind -- are unreliable?

No: that proposition does not logically follow. It is possible that some constructed memories -- i.e., some mental or neural inferential processes -- are reliable.
If our memories were systematically "unreliable," most people would get lost on their way to work, on their way home, etc. We generally remember many things correctly.

Of course, some memories -- e.g., very old ones, our memories of people seen only once, etc. -- are very probably substantially less trustworthy than many other memories.

Posted by Unknown at 4:12 PM No comments:

Email ThisBlogThis!Share to TwitterShare to FacebookShare to Pinterest
Labels: reliability and unreliability of always-constructed memories

[M]emory is a creative process. Our conscious memories are constructed from both conscious recall and unconscious knowledge.

Posted by Unknown at 4:53 AM No comments:

Vision is often incorrectly compared to the operations of a camera. Unlike a camera, however, the visual system is able to create a three-dimensional representation of the world from the two-dimensional images on the retina. In addition, an object is perceived as the same under strikingly different visual conditions.

A camera reproduces point-by-point the light intensities in one plane of the visual field. The brain, in contrast, parses scenes into distinct components, separating foreground from background, to determine which light stimuli belong to one object and which to others. In doing so it uses previously learned rules about the structure of the world. In analyzing the incoming scream of visual signals the brain guesses at the scene presented to the eyes based on past experience.

This constructive nature of visual perception has only recently been fully appreciated. Earlier thinking about sensory perception was greatly influenced by the British empiricism philosophers, notably John Locke, David Hume, and George Berkeley, who thought of perception as an atomistic process in which simple sensory elements, such as color, shape, and brightness, were assembled in an additive way, component by component. The modern view that perception is an active and creative process that involves more than just the information provided by the retina has its roots in the philosophy of Immanuel Kent and was developed in detail in the early 20th century by the German psychologists Max Wertheimer, Kurt Koffka, and Wolfgang Koehler, who founded the school of Gestalt psychology.

The German term Gestalt means configuration or form. The central idea of the Gestalt psychologists is that what we see about a stimulus--the perceptual interpretation we make of any visual object--depends not just on the properties of the stimulus but also on its context, on other features in the visual field. The Gestalt psychologists argued that the visual system processes sensory information about the shape, color, distance, and movement of objects according to computational rules inherent in the system. The brain has a way of looking at the world, a set of expectations that the rides in part from experience and in part from built-in neural wiring.

Posted by Unknown at 4:29 AM No comments: