John McCarthy, Inventor of "AI" and a Founder of AI, Dies


McCarthy was, among many things, a serious student of  "common sense."

In response to Lofti Zadeh's questions about causality I posted the following comment to the BISC Group list:


I want to say a few words about causality from a legal perspective, mainly from the standpoint of (my view of) what goes on in lawsuits and trials:

1. Lotfi is certainly correct that the law takes the view that events – almost all events, in any case – have multiple causes.


2. The law frequently takes the view that there are degrees of causation – that some automobile accident was caused, e.g., “to a substantial extent” by some defendant's actions or carelessness.


3. But it is hard to speak of a unitary theory of causality in law. For example, in litigation normative responsibility and factual causation is often lumped together. Even when factual and normative components are distinguished, the law often speaks only in a “commonsense” way about causation.


4. In the wave of lawsuits and cases involving technical and scientific evidence (a wave that has been passing over us in the United States for more than half a century), there are frequent attempts to develop or use something other than commonsense notions of causation. For example, scientists are routinely invited to testify about their opinions of the cause or causes of this or that disease or this or that failure of some machinery. However, in these cases the scientific or technical models of causality (when they're offered, which is not always) do not usually supplant the law's commonsense view of causation. There are various reasons for this. One reason, I think (see my next post), is that many scientific causal accounts of events depend to some degree on idealized circumstances (e.g., a “complete vacuum”) and in legal contexts there is often a question of the extent to which those idealized conditions existed and, if they did not perfectly exist, to what extent the scientific causal account in question holds for the event or events or states that are in issue in the particular lawsuit or trial.

5. I have personally struggled at great length over what are sometimes thought to be the competing claims or Bayesianism and fuzzy logic. I belong to the camp that thinks that these two approaches to uncertainty, vagueness, and similar matters are not necessarily mutually exclusive. I am not a mathematician or logician, but I personally find that fuzzy logic approaches to semantic and conceptual vagueness are more intuitive and illuminating than Bayesian accounts (even though perhaps one cannot deny that Bayesian logic seems to work to some extent in contexts such as Google searches, but then I have been led to believe that fuzzy logic is also very important for Google searches). For partly this reason, the reflective part of my nature is inclined to think that fuzzy logic is a natural and powerful way of thinking about the way the law thinks of causality. The law's notions of causality are extraordinarily vague (though not always extraordinarily disordered)!


6. The next question that always comes to my mind is what the contribution of fuzzy logic to actual legal practice (e.g., trials) can be when (as is almost always the case) the law “believes in” – or assumes – that there are causes, that we live in a world in which there are causes, and undertakes (e.g., in lawsuits) to gather evidence about causes and to that end allows the legally-authorized trier (or “finder”) of fact to hear what are generally regarded as causal accounts – be they Freudian psychoanalytic accounts, accounts based on Newtonian mechanics,  accounts about the mechanisms involved in the transmission of AIDS, and so on. My inclination is to believe that in these investigations there has to be a way to marry fuzzy logic to causal reasoning if fuzzy logic approaches are to be useful – because in some circumstances (though definitely not in all) the law simply will not abandon its belief in or supposition of causes and effects.


7. Despite my puzzlement about the matter just mentioned in par. 6,  I have a sort of global admiration for fuzzy logic because of my belief that (i) causal explanations of specific phenomena are generally necessarily incomplete both for specific events (“What made Jimmy's car cross the median”?) and (ii) causal accounts are necessarily incomplete theoretically speaking – simply because knowledge of causes of space-time events (if such causes exist) are necessarily imperfect –because human knowledge of the cosmos is necessarily partial. If you grant what I have just said, the capacity of formal scientific models to work and make fairly accurate predictions is something of a mystery. But the same is true of everyday commonsense knowledge of the world: Commonsense  knowledge, language, concepts, etc., sometimes or often “work” even though they seem to rest on partial knowledge. This leads me to an inference (and I wonder what all of you think of my naïve insight): Ordinary language and concepts harbor much tacit but genuine knowledge – and this is what makes fuzzy logic useful, what makes some or many fuzzy logic applications possible. Supposing that this drift in my thinking has some validity, I am led to wonder whether formalizations of fuzzy legal ways of talking and thinking about causation might in some sense improve (and not just describe) the law's effort to “establish” the cause or causes of this or that event, events, state, or states. I await edification from the BISC community!

Posted by Unknown at 8:30 PM No comments:

Few concepts are as pervasive as the concept of causality. Causality has a position of centrality in medicine and legal reasoning. Causality is pervasive in everyday reasoning and decision-making. But what is widely unrecognized is that in the enormous literature of causality what cannot be found are theories which work in real-world settings--settings in which information is uncertain, imprecise, incomplete or partially true. If you know of a working theory developed by yourself or others, please bring it to my attention. I will admit that I am wrong if you are right.

As an underlying issue, causality plays an important role in political debates. Was the financial crisis caused by Wall Street? To improve the economy, the Federal Reserve lowered the interest rate from 1% to 0.8%. Six months later, the economic activity rose by 5%. Was the increase in economic activity caused by lowering the interest rate? Will a particular initiative cause a decrease in unemployment? Is Obama's stimulus program a success or failure? What lessons can be drawn from RP to answer such questions?

A sobering thought is that no theory of causality can answer such questions. Is Obama's stimulus program a success or failure? Republicans argue that it is a failure because the unemployment rate remains above 9%. The democrats can argue, counterfactually, that it is a success because without the stimulus the unemployment rate would be over 12%. The problem is that counterfactual arguments are much less convincing than factual arguments. Nevertheless, the fact remains that in the instance of political debates, most causality assertions can neither be proved nor disproved. It would be much more realistic to accept that basically causality is a matter of degree. Once this is accepted, debates will become less polarized. A fundamental conclusion is that in realistic theories of causality, causality should be a matter of degree. To put it another way, realistic theories of causality should necessarily be based on fuzzy logic. Having said that, a word of caution is in order. Introduction of degrees into theories of causality is an undertaking which is far from simple to formalize. Comments are welcome.

URL: http://zadeh.cs.berkeley.edu/
Posted by Unknown at 7:41 PM No comments:

Email ThisBlogThis!Share to TwitterShare to FacebookShare to Pinterest
Labels: fuzzy logic and causality

Going back to [Andrew] Gelman’s analysis of the standard view, he points out that one very negative consequence of subscribing to the bayesian bundle, is that it encourages bayesians to cultivate the bad habit of disregarding model checking. This, according to Gelman, depends crucially on the subjective view of probability which Bayesians embrace. One is easily reminded here of the classic line by F.J. Anscombe: “To anyone sympathetic with the current neo-Bernoullian neo-Bayesian Ramseyesque Finettist Savageous movement in statistics, the subject of testing goodness of ﬁt is something of an embarrassment”, F.J. Anscombe (1963, “Tests of Goodness of Fit”, Journal of the Royal Statistical Society. Series B Vol. 25, No. 1, pp. 81-94).

It's here: the law of evidence on Spindle Law. See also this post and this post.
Posted by Unknown at 9:48 AM No comments:

Email ThisBlogThis!Share to TwitterShare to FacebookShare to Pinterest
Labels: subjective bayesianism and models

Some of you may not be aware of the online monthly magazine The Reasoner. If you are philosophically inclined or are interested in matters such as logic, argumentation theory, and inference, I strongly suggest you subscribe (free) to this magazine.


The magazine's own blurb describes itself this way:

It's here: the law of evidence on Spindle Law. See also this post and this post.
Posted by Unknown at 8:44 AM 2 comments:

Email ThisBlogThis!Share to TwitterShare to FacebookShare to Pinterest
Labels: literature on inference and logic, The Reasoner

It's here: the law of evidence on Spindle Law. See also this post and this post.
Posted by Unknown at 4:53 PM No comments:

Thinking about and Picturing Places and Events in Time 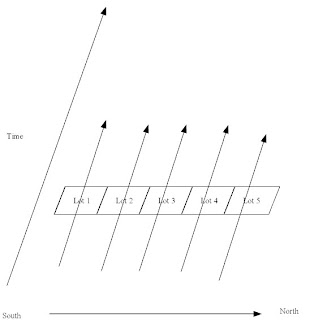 These particular space-time lines are designed to show, not the movement of things in time, but to show events over time associated with specific places (lots).

A more sophisticated version of this idea would have four dimensions (and would facilitate visualizing the movement of things and persons in space).