Do You Believe in Sociobiology and Law? 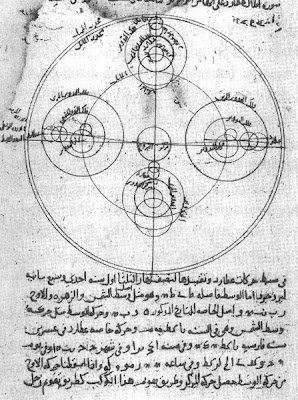 Ibn al-Shatir's model for the appearances of Mercury, showing the multiplication of epicycles in a Ptolemaic enterprise. 14th century C.E.

If you are an enthusiast for law and sociobiology -- law's version of ultra-Darwinism (or the modern equivalent of Mr. Herbert Spencer's Social Statics) --, you should take a gander at David Stove, So You Think You Are a Darwinian?

Of course most educated people now are Darwinians, in the sense that they believe our species to have originated, not in a creative act of the Divine Will, but by evolution from other animals. But believing that proposition is not enough to make someone a Darwinian. It had been believed, as may be learnt from any history of biology, by very many people long before Darwinism, or Darwin, was born.

...I start from the present day, and from the inferno-scene - like something by Hieronymus Bosch - which the 'selfish gene’ theory makes of all life. Then I go back a bit to some of the falsities which, beginning in the 1960s, were contributed to Darwinism by the theory of ‘inclusive fitness’. And finally I get back to some of the falsities, more pedestrian though no less obvious, of the Darwinism of the 19th or early-20th century.

1. The truth is, ‘the total prostitution of all animal life, including Man and all his airs and graces, to the blind purposiveness of these minute virus-like substances’, genes.

This is a thumbnail-sketch, and an accurate one, of the contents of The Selfish Gene (1976) by Richard Dawkins. It was not written by Dawkins, but he quoted it with manifest enthusiasm in a defence of The Selfish Gene which he wrote in this journal in 1981. Dawkins’ status, as a widely admired spokesman for ultra-Darwinism, is too well-known to need evidence of it adduced here. His admirers even include some philosophers who have carried their airs and graces to the length of writing good books on such rarefied subjects as universals, or induction, or the mind. Dawkins can scarcely have gratified these admirers by telling them that, even when engaged in writing those books, they were ‘totally prostituted to the blind purposiveness of their genes Still, you ‘have to hand it’ to genes which can write, even if only through their slaves, a good book on subjects like universals or induction. Those genes must have brains all right, as well as purposes. At least, they must, if genes can have brains and purposes. But in fact, of course, DNA molecules no more have such things than H2O molecules do.

Whatever your opinion of "Intelligent Design," you’ll find Stove’s criticism of what he calls "Darwinism" difficult to stop reading. Stove’s blistering attack on Richard Dawkins’ "selfish genes" and "memes" is unparalleled and unrelenting. A discussion of spiders who mimic bird droppings is alone worth the price of the book. Darwinian Fairytales should be read and pondered by anyone interested in sociobiology, the origin of altruism, and the awesome process of evolution.

The blurb by Encounter Books states:

Philosopher David Stove concludes in his hilarious and razor-sharp inquiry that Darwin’s theory of evolution is “a ridiculous slander on human beings.” But wait! Stove is no “creationist” nor a proponent of so-called “intelligent design.” He is a theological skeptic who admits Darwin’s great genius and acknowledges that the theory of natural selection is the most successful biological theory in history. But Stove also thinks that it is also one of the most overblown and gives a penetrating inventory of what he regards as the “unbelievable claims” of Darwinism. Darwinian Fairytales is a must-read book for people who want to really understand the issues behind the most hotly debated scientific controversy of our time.

I will send you an article by email by Richard C. Lewontin that I think you will be interested in....

For now let me say that I disagree with Stove in his framing of the issues regarding Darwinism, and especially with the parts of the article that deal with Malthus, and the Malthusian influence in general.

I intend to set out my thoughts more completely on the points made in his short article but I doubt I will get around to reading his book as a whole. Briefly, let me say that in his list of ten principles of "Darwinianism" Stove is stating partial insights of evolutionary biology, which he then takes to be the whole explanation of evolutionary biology. In doing so he mirrors the mistakes of the worse sociobiologists who take evolutionary biology to be a theory of everything human.

Also, briefly... I am very skeptical of biological theories of human history and culture and society. And yet, I think, both evolutionary psychology and sociobiology are interesting hypotheses. If taken as hypotheses then they have their place. As an example of a book written in this mode, with much insight I would recommend Sarah Hrdy's "Mother Nature: A History of Mothers, Infants and Natural Selection."

The biggest problem with sociobiology when applied to humans is the lack of comparative background data. To put it simply, there are not enough surviving ape and hominid primate species to establish a base of comparison. Think of it this way. We are able to create a sociobiological hypotheses of ants because there are so many different species of ants operating in different ecological niches. The difference of niche construction makes for slightly different social organization between species. Both comparative ethology and social ethology are well established and worth doing, if the scientist is careful. Sociobiology is essentially a branch of comparative ethology and it works well when there are similar species and/or similar ecological niches being exploited by the species to establish hypotheses about the reasons for the difference in species behavior.

As for applications of sociobiology or evolutionary psychology to law there are additional reasons to be skeptical. As the old Marxists used to say, the number and distance of "mediations" between the biological base and the legal result are simply too distance.

But... Surely, our biology sets limits and boundaries that result in some of our legal insights. I refer you to Marc Hauser's "Moral Minds" for a discussion one what he believes is a universal moral grammar.

I reproduce here part of a message I sent privately by e-mail.

I add now: I do not disagree that "our biology sets limits and boundaries that result in some of our legal insights."

I also add now that I agree with the spirit of your comment:

"As for applications of sociobiology or evolutionary psychology to law there are additional reasons to be skeptical. As the old Marxists used to say, the number and distance of "mediations" between the biological base and the legal result are simply too distance.

In my e-mail message I confessed my ignorance by saying this:

"I haven't taken part in the wars over law and sociobiology or over sociobiology, let alone over evolution. And I think it's better that I stay out of those frays; people with real scientific knowledge should take part. But my sense is that law professors (and many other non-scientists) tend to bastardize science when they get enthusiastic about it. That's because, I think, few law professors do hard science and perhaps for that reason do not really understand particular branches of it. (What scientist claims to understand all of science?) Stove's comments caught my eye because I have heard a couple of people in Law & Sociobiology speak and I thought they said some very silly things. Blogging allows me the chance to shoot in the dark to puncture the oral comments of an occasional, unidentified, and misinformed person of that sort and relieves me of the obligation to examine the literature carefully."

"My inclinations run toward the philosophical and epistemological. I believe imaginative personal judgment and conjecture play a large role in the investigative and preparatory work that trial lawyers, or litigators, do. My view about this (and similar matters) more than occasionally makes me doubt overly-deterministic (and by using the preceding phrase I am begging a big question) accounts of human behavior. However, this does not mean I am preparing a brief for any creationists or people who believe in intelligent design. But I am interested in one of the fundamental puzzles of human existence: the apparent (mental?) creativity of human beings."


But my self-confessed ignorance about the nuances of contemporary evolutionary theory does not present me from raising this question:

Didn't Dawkins or haven't some of his admirers sought to explain religion by a thing they called the "religion meme"? If so, do we all agree that such a hypothesis is little more than a metaphysical hypothesis (in the old sense of "metaphysical," in the sense in which British empiricists have used that word, "metaphysics" taken to refer a field that advances hypotheses that lack empirical support or, worse yet, that range beyond the possibility of empirical testing [because, perhaps, all necessary epicycles can be constructed when the occasion {a skeptical challenge} demands])?

I have the impression many law and sociobiology people are now moving into law and neuroscience. I have nothing against law and neuroscience. I think that in principle it's a good thing. Indeed, I have on occasion whispered to my colleagues that our law school ought to something in this area. (I got nowhere.) But here again I fear that (and some evidence supports my fear) that some of the law folks who are interested in law & neuroscience will give the "science" end of this field short shrift.

If science teaches anything, it teaches that one must advance cautiously; it teaches [in part] that one must rigorously test -- by logic or observation or both -- each link of an argument. Otherwise much seemingly-plausible nonsense may come to be taken as the Gospel truth. (I think here particularly of people who seem to ascribe every known human ailment to Lyme disease or to vaccines administered to children. No data can get in the way of these people -- or of people who believe that {people of some description} just don't lie and who say, "Believe {all of} the {people of some description [often called 'survivors']}.") An aside: I heard on the news today -- I was half-asleep -- that someone claiming to be a survivor of the World Trade Center collapse has been fully unmasked as a fraud. This survivor apparently has appeared before audiences to recount her horrific experiences. Apparently everyone in these audiences felt it would be inappropriate to ask, "Is that really true?" It now appears that her stories were pure fiction. Being a "survivor" has become a promising career path for some people.