... but -- of course -- John Henry Wigmore got started decades ago on the business of "visualizing" complex argument. He gave us the following sorts of pictures of complex argument from evidence: 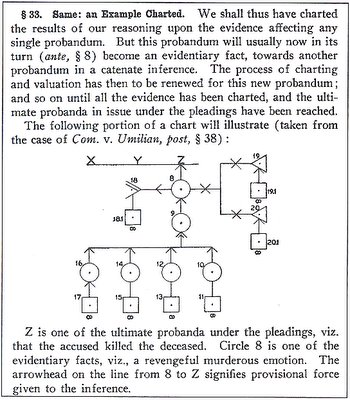 Wigmore, however, was not the first person to diagram argument from or about evidence. William Lambarde did so in the seventeenth century -- his handbook for justices of the peace contained a diagram depicting the temporal sequence of events in issue and events that serve as evidence, or indicia, of such events in issue -- and even Lambarde's diagrams apparently drew on diagrams constructed much earlier. See B. Shapiro, INTELLECTUAL HISTORY, PROBABILITY, AND THE LAW OF EVIDENCE: "Beyond Reasonable Doubt" and "Probable Cause": Historical Perspectives on the Anglo-American Law of Evidence 152-154 (1991).

V. interesting about Lambarde. The earliest example of argument mapping I had been able to uncover was Whately, 1826 - see http://www.austhink.org/whately.htm

I do wonder if Lambarde's diagram is really an example of what I would count as a core case of argument mapping i.e., does it indicate logical or evidential relationships among whole distinct *propositions*. A map which diagrammed relationships between events may be closely related but not quite the same thing.

I would say that Lambarde's diagram is a different form of argument mapping. It is a form of argument mapping, or evidence marshaling, that focuses on temporal and causal relationships between events in issue and sources of evidence; i.e., laying out and considering the causal and temporal relationship between events in issue and temporal sources of evidence {events that are evidential sources} is one type of argument about evidence. Cf. the difference between Pearl's causal nets and the non-causal maps that Twining usually construct. My view is that both kinds of maps have their uses and there is no necessary incompatibility between them. Trouble arises when a person (e.g., possibly, Pearl) claims that only one form of argument (in Pearl's cause, Bayesian causal nets) is valid. Footnote: In his principal treatise Wigmore himself used a version of Lambarde's diagram but, as I recall, he did not acknowledge that he had borrowed it from Lambarde and from a precursor of Lambarde (but I will double check).

I agree that "both kinds of maps have their uses and there is no necessary incompatibility between them." At the same time however I do think these are very different beasts; that they should be carefully distinguished; and that for clarity we should use different names for them. (What names we actually use is a somewhat arbitrary matter.) As an illustration of the difference I often point to the link analysis of events surrounding the JFK assassination, available from http://www.i2inc.com/Downloads.asp This kind of chart contains lots of potentially useful information, but does not represent an argument, and thus (imho) should not be called an argument map, though it may well be a very useful tool in the process of developing an argument.
In our work with intelligence analysts we usually find them to be relatively sophisticated in marshalling the evidence (the mass of interconnected information relevant to the case), while being, by comparison, relatively weak when it comes to explicitly articulating the arguments, i.e., the structure of evidential relationships among propositions bearing ultimately on the truth or otherwise of the central contention of interest (e.g. that JFK was killed by Oswald).

I agree there is a fundamental difference between arguments of the sort that Wigmore & Twining make, on the one hand, and arguments in which causal and temporal relationships are essential, on the other. And when I myself have dabbled in diagramming arguments from and about evidence, I have often constructed diagrams that depict relations between propositions rather than between events. So I most definitely do not think that graphs of the sort that J. Pearl constructs are the only intellectually coherent method of argument mapping (a point that I tried to make on a list to Pearl himself several years ago). However, until we are much more sure of the reach and foundations of human knowledge, I think it is important not to establish a hierarchy among forms of argument mapping. If one accepts Pearl's ontological premises, Pearl's mapping strategy may be the correct one. More important, even if one does not accept Pearl's ontological premises fully (and this is the boat in which I ride), Pearl's general approach toward diagramming inference remains important (sometimes!) -- if, that is, one believes that causality plays a role in our world.

N.B. I think some of the mutual incomphrehension between fuzzy set people and traditional probability theorists may have to do with implicit differences of opinion about the extent to which "surface" knowledge of the world -- something short of knowledge of causes -- works. I am inclined to think that surface knowledge in some real sense does work (and exist) to some extent; if it did not, I suspect it would be hard to explain how human beings manage to survive for even one day. By the same token, I do believe that something akin to causality does reign in at least some spheres of the world -- and it seems apparent that sometimes "knowledge of causes" does improve our ability to manage our world -- and make inferences. So if something like this is the nature of human thinking -- if we use different forms of thought--, we need diagramming methods and forms of argument that capture our different modes of thought and argument. (But when we have laid out our various arguments in our various ways, we will have to decide -- in that one instance in any event -- which arguments trump other arguments. But we can leave this point for another day.)