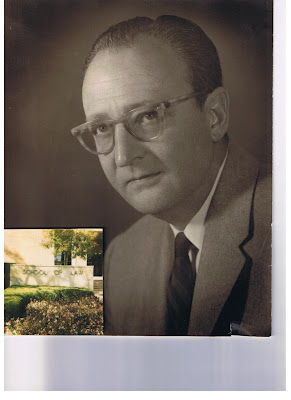 James Chadbourn in the 1950s


From the Wikipedia entry for James H. Chadbourn:


I did research for James H. Chadbourn for a number of years while he taught at Harvard Law School. ... Chadbourn hated deans -- without exception. ... I don't know what lay at the root of Chadbourn's contempt for deans. Part of the reason may have been philosophical and temperamental: he was a curmudgeon -- a gentle curmudgeon -- and a skeptic, and he was generally distrustful of authority. Another part of the reason may have been his experiences with authority while he taught at UCLA: the story has it that he fought bitterly against a McCarthyite attempt to purge two junior faculty members who were accused of being Communist sympathizers. ...


Peter Tillers reports that he heard from Chadbourn's friends or family, not only that Chadbourn came to detest the dean that he initially served under at UCLA, but also that Chadbourn, after declining to become one of the law school's founding faculty members, agreed to join the law school in 1950. Chadbourn, who had been teaching at the University of Pennsylvania, thought he would become one of the senior faculty members at UCLA. But on arriving at UCLA, he discovered, to his horror, that Roscoe Pound had become a faculty member at UCLA's new law school. Chadbourn - for some reason - detested Roscoe Pound.


It turned out that Chadbourn had ample reason to detest both Roscoe Pound and the first dean of UCLA Law School, L. Dale Coffman. The wave of the post-World War II anti-communist fervor had reached California by 1950. The board of regents of the University of California resolved that all faculty members had to take loyalty oaths. Dean Coffman and Roscoe Pound agreed that law faculty members should also be required to do so.[1]
----

1. Renee Y. Rastorfer, "THOMAS S. DABAGH AND THE INSTITUTIONAL BEGINNINGS OF THE UCLA LAW LIBRARY: A CAUTIONARY TALE," 95 Law Library Journal 347, 357 (2003) ("[T[he dean of the law school, L. Dale Coffman, became a vocal supporter of the loyalty oath. In later years, he recalled that Regent Edward Dickson was unhappy about the controversy embroiling the system. 'Indeed so. As a matter of fact, that's why he came to me to see if [Roscoe] Pound and I and other members of the faculty would make public statements in that regard. I did to the Examiner. Pound did, too .... I stated publicly that I'm not a communist, I never have been, I never expect to be, and I don't see where in it interferes with my academic freedom to say so.')


See generally, N.E.H. Hull, Chapter 6 ("Pound Moves to the Right and Llewellyn Applies Himself") in Roscoe Pound and Karl Llewellyn: searching for an American jurisprudence (Chicago, 1997).


&&&
The dynamic evidence page
It's here: the law of evidence on Spindle Law. See also this post and this post.

I yield to no person in my hatred for Stalinism. But, like many other people, I believe that the imposition of loyalty oaths in the 1950s violated important American values of freedom of conscience and liberty.

Some whippersnapper has proposed that the Wikipedia entry for Professor Chadbourn be deleted. If you wish to save the entry, promptly go to http://en.wikipedia.org/wiki/James_H._Chadbourn and register your vote or opinion!