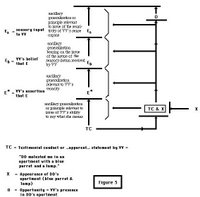 A Pilgrim's Tale: Bayesian Dragons and Other Illusions

I recently decided to post on the web some of my older papers that either are not available on LEXIS or WESTLAW or are available only in an imperfect form (because of the inability of the LEXIS and WESTLAW databases to reproduce diagrams, charts, and similar matter). Hence, Dear Reader, you can now peruse my disquisition about the "New [sic; see below] Evidence Scholarship," a disquisition that takes the form of a homily or parable about Bayesian dragons and other illusions.
Posted by Unknown at 11:47 AM No comments:

A New Science of Evidence

The following essay is now available on SSRN: Peter Tillers, "Webs of Things in the Mind: A New Science of Evidence," 87 Michigan Law Review 1225 (1989). This essay is available at the URL http://ssrn.com/abstract=880130.

The version of the essay available at SSRN, unlike the version available from the LEXIS and WESTLAW databases, accurately reproduces various diagrams that are central to the argument of the essay.

Ordinary people may ordinarily be lousy lie detectors under ordinary circumstances. Granted, this possible state of affairs may be a parlous one. But the question is this:

Do you have a better alternative?

Some people think they are on the verge of developing a better lie detector. And some people apparently even think that they have already acquired a high-tech key to the truth. See the entertaining and nuanced article, "Looking for the Lie," by Robin Marantz Henig in today's issue of the NYTimes Sunday Magazine (Feb. 5, 2006).

Henig recognizes, as many students of lie detector devices do not, that the accuracy of a testimonial report does not depend solely on the extent to which the testimonial source seeks to report the belief that he or she actually has. Many people genuinely hold foolish and false beliefs, and people sometimes inadvertently make assertions that they do not mean to make.

Ah, were it only possible to devise a machine that could "detect" all possible causes of errors in testimonial reports! Then we really would have a shortcut to proof and we could dispense with these complicated, expensive, and ridiculous proceedings called trials.

But it appears that a sucker is still born at least every minute or so. Consider, for example, Henig's account of the "holistic" lie detection method that Paul Ekman apparently peddles to law enforcement agencies. Ekman uses a lie detection procedure that employs a system of classification that he calls the "Facial Action Coding System." I have no doubt that Ekman has empirically verified the diagnostic power of all of the 10,000 or so significantly distinct facial expressions that he believes are generated by combinations of 43 independent muscles. (The article explains that Ekman also identifies other putative signs of credibility or incredibility.) In the NYTimes article Henig reports that Ekman stated that he has a "a rule that prohibits him from commenting on any elected official currently in office, no matter how tempting a target." The implication is that Ekman's sense of ethics leads him to adhere to this rule. One wonders if another motivation for Ekman's rule might be Ekman's fear that the use of his method to diagnose the veracity of contemporary public figures might cast some doubt on the degree of the accuracy -- 95% or so, no less -- that Ekman claims that his system of lie detection achieves. (Of course, the 95% statistic needs to be refined. I have a foolproof method for catching all lies. My method amounts to this: Declare that all testimonial reports -- except my own -- are lies.)

Posted by Unknown at 2:25 PM No comments: