Abstract of an Unwritten Paper: Whither and Wherefore Formal Representations of Evidence and Inference?

Forms of Uncertainty in Legal Reasoning
Peter Tillers (c) 2005
for
BISC Special Event in Honor of Prof. Lotfi A. Zadeh

There have been relatively few attempts to use fuzzy set theory or soft computing methods to dissect or portray inconclusive reasoning in law. From the perspective of a legal professional who is interested in rigorous study of uncertainty in law, this gap in research in fuzzy logic and soft computing is lamentable. Notions such as fuzzy and rough sets and logical procedures such as those described by fuzzy inference rules are extraordinarily evocative of notions and procedures that are routinely found in argument in legal contexts such as litigation. It seems obvious that a major research project on soft computing and uncertain legal argument should be launched. However, recent experience with attempts to use the standard probability calculus to dissect uncertain reasoning in law about factual questions suggests that before a major research project on soft computing and law is begun, interested soft computing researchers and interested legal professionals should try to reach agreement about the possible distinct purposes that any given mathematical or logical analysis of inconclusive legal argument might serve. Putting aside the special (and comparatively uninteresting) case of mathematical methods, or formal methods, that make their appearance in legal settings because they are part of admissible forensic scientific evidence, mathematical or logical analysis of inconclusive argument in law could have any one (or more) of the following distinct purposes (but research could and should explore the extent to the realization of any one of the purposes of formal analysis enumerated below might advance one or more of the other purposes enumerated below):

1. To predict how judges and jurors will resolve issues in litigation.

2. To devise methods that can replace existing methods of argument and deliberation in legal settings.

3. To devise methods that mimic conventional methods of argument in legal settings.

4. To devise methods that support or facilitate existing, or ordinary, argument and deliberation in legal settings by mathematically illiterate actors such judges, lawyers, and jurors.

5. To devise methods that would capture some but not all ingredients of argument in legal settings about factual questions or legal questions.

6. To devise methods that perfect – that better express, that improve the transparency of – the logic or logics that are immanent, or present, in existing ordinary inconclusive reasoning about uncertain hypotheses that arise in legal settings.

7. To devise methods that have no practical purpose – and whose validity cannot be empirically tested – but that (ostensibly) serve to advance understanding of the nature of inconclusive argument about uncertain hypotheses in legal settings.

The [non-existent] paper discusses the distinctive characteristics of these various purposes from a legal perspective.
&&&

Federal Rules of Evidence 413-415: Looking Backward and Forward: A Sea Change or a Historical Footnote?

In 1994 Congress enacted Federal Rules of Evidence 413-415 into law. (These Rules went into effect in 1995.) Rules 413-415 openly proclaimed that some criminal conduct of a person on another occasion (criminal conduct of a sexual nature) could be used by the trier of fact to determine whether or not the person had engaged in some sexual wrong that is at issue in some trial. Although the workings and wrinkles of the preexisting character evidence rule, the traditional prohibition against "circumstantial" use of "uncharged" crimes and wrongs, was often more pretense than reality -- particularly in cases involving charges of criminal sexual wrongdoing against children -- Rules 413-415 were, at an important level, a major break with the traditional body of evidence law and principles in criminal cases -- precisely because these Rules openly sanctioned a major breach in the traditional character evidence rule, whose gist is effectively if somewhat misleadingly conveyed by the saying that a person must be tried for what the person did, not for what the person is.

The enactment of Rules 413-415 was preceded, accompanied, and followed by much controversy: the U.S. legal academic community -- that part of it that spoke out, in any event -- stood virtually unanimously in opposition. This opposition raised a number of fundamental questions, questions about the workings of the American adversary criminal justice system, the capacities and limits of the jury, the basic purposes of nonconstitutional exclusionary rules in general and the character or propensity rule in particular, the empirical underpinnings and assumptions underlying both the traditional character evidence prohibition and Rules 413-415, and, finally, the extent or nature of constitutional constraints on rules of evidence in criminal cases.

The multi-pronged academic assault on Rules 413-415 failed. After the Rules were enacted, the only effective practical form of opposition to the Rules was by an assault on the constitutionality of the Rules. (Repeal of the Rules was and is a political impossibility.) Courts, however, uniformly rejected the claim that Rules 413-415 violate the federal constitutional due process guarantee or other federal constitutional rights. See, e.g., United States v. Meacham, 115 F.3d 1488 (10th Cir. 1997). (It may be sobering -- to academics, in any event -- to see how cursory judicial discussions of this constitutional question were and are in comparison with the typical academic treatment of the matter in law journals.)

One important lingering question (there are others) is whether Federal Rules of Evidence 413-415 did or did not portend a major shift in the direction of the law of evidence in general or in the character evidence prohibition (and related legal principles such as relevance and undue prejudice) in particular. Or will it turn out, in the very long run, that Rule 413-415 were an eruption born of a particular political constellation in Congress at a particular time and largely limited to a particular sector of the America legal process, to federal trials involving claims of sexual wrongdoing? What is relatively clear is that Rules 413-415, despite their importance in their own domain, did not usher in a quick, sweeping, and widespread change in the law of evidence or in the way that civil and criminal wrongs and rights are tried in the United States. But did Rules 413-415 leave a mark on the way the legal profession thinks about evidentiary processes in adversary adjudication?

The Course of Legal Evidential Discovery

Posted by Unknown at 6:01 PM No comments:

Posted by Unknown at 4:35 PM No comments: 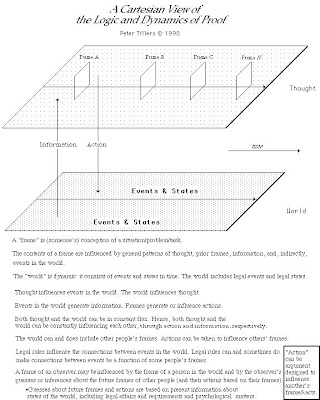 Posted by Unknown at 4:20 PM No comments:

Posted by Unknown at 3:37 AM No comments:

My hope is that a reconstituted United States Supreme Court will someday reexamine Youngblood and will study how the judiciary, under a due process umbrella, can oversee pretrial investigation in criminal cases to enhance the accuracy of criminal adjudication.

MarshalPlan has quite a few time lines already -- for example, a case time line (for events at issue chronologically arranged), a tangible evidence time line (to show changes over time in the condition of tangible evidence), a witness time line (similar; what happens to a witness over time). Now there are the beginnings of a new time line: an investigation and proof time line -- showing decisions over time by legal actors (e.g., investigators, lawyers) about or in investigation and proof. Cf. The Many Faces of Time in Organizing Evidence (May 24, 2009).
&&&

Posted by Unknown at 9:58 PM No comments: