Some articles in Law, Probability and Risk 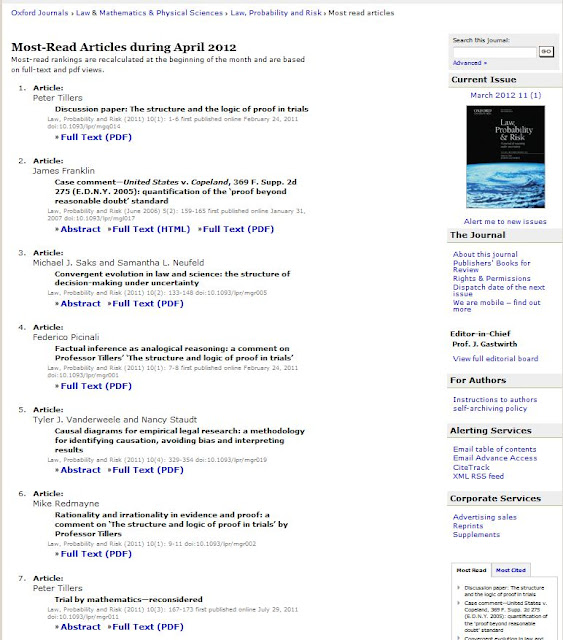 Posted by Unknown at 1:26 AM No comments:

Email ThisBlogThis!Share to TwitterShare to FacebookShare to Pinterest
Labels: Law, Probability and Risk - the journal

Deprivation of Liberty without Due Process in America


Jonathan Weisman, House Vote Upholds Indefinite Detention of Terror Suspects NYTimes (May 18, 2012):
"The House on Friday turned back an unusual coalition of liberals and conservatives and voted down legislation to reject explicitly the indefinite detention of terrorism suspects apprehended on United States soil.
...
"Well before the final vote, the White House promised a veto if the final version maintained the House spending levels and tied President Obama’s hands on detainee and nuclear policies. ...
...
"The Defense Authorization Act is required each year to set Pentagon policy and spending levels, but House Republicans have turned it into a showcase for their opposition to Obama administration policies.
"This year, Democratic leaders had some surprise support. Representative Justin Amash of Michigan, a Tea Party-backed freshman Republican, teamed up with Representative Adam Smith, Democrat of Washington, to declare that terrorism suspects apprehended on United States soil should not be detained indefinitely without charge or trial.

"But the left-right coalition fizzled in the face of charges that the two lawmakers were coddling terrorists. On the 238-to-182 vote against the amendment, as many Democrats — 19 — voted against it as Republicans voted for it.

"'We’ve got a ways to go still, but there are a lot of Republicans who are listening now,' Mr. Amash said. 'I’m confident that most of them are going to go back to their districts, and they are going to get hammered on this issue.'"
&&&
The dynamic evidence page
Evidence marshaling software MarshalPlan

Forensic Use of Social Science

In a blog post in the New York Times yesterday, Professor Gary Gutting of Notre Dame asks, "How reliable are the social sciences?" His remarks are not directed specifically at the use of social science in legal proceedings. And he (necessarily) writes with a broad brush. Nonetheless, his comments are quite perceptive and he identifies several fundamental questions that are directly germane to the use of social science results in legal proceedings such as trials. You should read this blog post!
&&&
The dynamic evidence page
Evidence marshaling software MarshalPlan

Posted by Unknown at 7:51 AM No comments:

Investigation by James Liebman and Students of Execution of Carlos DeLuna

I thought you might be interested in reading about a new investigation published today by the Columbia Human Rights Law Review and at the website thewrongcarlos.net. Professor James Liebman and a team of students led the investigation into the 1989 execution of Carlos DeLuna in Texas. The report has been covered today in The Guardian and at The Atlantic, among other media outlets.
Columbia Law School Investigation Uncovers New Evidence Suggesting Texas Executed Innocent Man
Media Contact: Public Affairs, 212-854-2650 or publicaffairs@law.columbia.edu
New York, May 15, 2012—A groundbreaking investigation by Professor James Liebman and a team of Columbia Law School students has revealed new evidence demonstrating that the State of Texas likely executed an innocent man in 1989.
The investigation, published today by the Columbia Human Rights Law Review (HRLR) and at the website thewrongcarlos.net, represents one of the most comprehensive collections of materials and evidence about a criminal case ever released to the public. It describes the case of Carlos DeLuna, a poor Hispanic man in his twenties with childlike intelligence who was convicted on the thinnest of evidence for the 1983 murder of a convenience store clerk. The materials include video and notes from hundreds of interviews with witnesses and key participants, the complete case files from police and prosecutors, and previously unreleased police audiotape of the manhunt that resulted in DeLuna’s arrest.
The HRLR has devoted its entire Spring 2012 issue to this book-length anatomy of a wrongful execution, titled Los Tocayos Carlos.
“No one cared enough about the defendant or the victim to make sure they caught the right guy,” said Liebman, a leading death penalty litigation expert and the Simon H. Rifkind Professor of Law at Columbia Law School. “Everything that could go wrong in a death penalty case did go wrong for DeLuna.”
The article documents how DeLuna was convicted on the basis of a single, nighttime, cross-ethnic eyewitness identification with no corroborating forensic evidence. He claimed from the start that another man named Carlos—Carlos Hernandez—stabbed clerk Wanda Lopez to death with a lock-blade buck knife at a convenience store in Corpus Christi, Texas. DeLuna’s assertion was derided by some as the “some other dude named Carlos” defense, and the lead prosecutor told the jury that Carlos Hernandez was a “phantom” of DeLuna’s imagination.
Liebman and his co-authors, however, uncovered evidence showing that not only did Carlos Hernandez exist, but he was known to police and prosecutors at the time of the trial as someone with a long history of crimes similar to the one for which DeLuna was executed. The police audiotape that Liebman and his authors have released—suppressed during DeLuna’s trial—shows that police chased another man who matched Hernandez’s (but not DeLuna’s) description for 30 minutes immediately following the crime.
Hernandez had been arrested for murdering another woman with a lock-blade buck knife, and he stabbed and attempted to rape another woman while DeLuna was confined to death row. Hernandez spent years bragging around Corpus Christi that he, not his tocayo (“twin” or “namesake”), Carlos DeLuna, committed the murder. Indeed, families of both Carloses mistook photos of the men for each other. 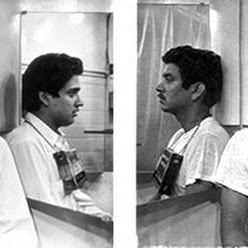 Photos: Police mug shots Carlos De Luna, left and Carlos Hernandez, right
"Sadly, DeLuna’s story is not unique,” Liebman said. “The very same factors that sent DeLuna to his death—faulty eyewitness testimony, shoddy legal representation, and prosecutorial misfeasance—continue to put innocent people at risk of execution today.”
The astonishing collection of primary documents and interviews allows readers to come to their own conclusions regarding DeLuna’s guilt or innocence. “My co-authors and I present the story as best we can tell it, and invite readers of all stripes to consider for themselves what happened and how concerned we should be about it,” Liebman said.
The materials presented in the article and at the website include:
·        complete files of police, sheriff’s office, district attorney, county court, trial transcripts, and federal court records
·        all of the police photos (which, via digital enhancement, revealed key evidence never recognized by the police, including the assailant’s bloody footprints)
·        a police audiotape of the 40-minute manhunt that led to Carlos DeLuna’s arrest
·        full criminal records of the key actors
·        a raft of television news clips and newspaper articles
·        20 videotaped interviews of key participants
·        notes from 100 witness interviews
·        an interactive map tracking key people, places, and events
For more information, please visit thewrongcarlos.net, or contact the Columbia Law School Public Affairs office at 222-854-2650 or publicaffairs@law.columbia.edu to arrange an interview.
&&&
The dynamic evidence page
Evidence marshaling software MarshalPlan

Dennis Hevesi,  Louis H. Pollak, Civil Rights Advocate and Federal Judge, Dies at 89 NYTimes (May 12, 2012):
"In January 2002 in a murder case [Lhera Plaza], he ruled that fingerprint experts could point out the similarities between prints from the crime scene to those of a defendant, but could not “present ‘evaluation’ testimony as to their ‘opinion’ that a particular latent print is in fact the print of a particular person.”


"His initial decision delighted defense lawyers and alarmed law enforcement officials. Two months later, after three days of testimony at a special hearing, Judge Pollak reversed himself. Still, he expressed deep concern that “there have been at least a few instances in which fingerprint examiners, here and abroad, have made identifications that turned out to be erroneous.'"