I have told my Fact Investigation students that planning for a witness interview is often somewhat like planning for trial.

This leaves the question: What does planning for trial involve?

The answer: Many things.

But some of the things one must usually plan for are shown below: 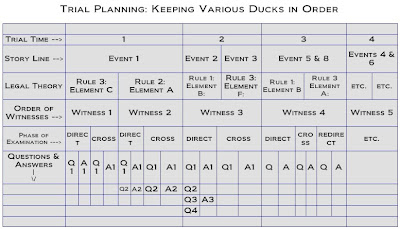 In this trial plan the trial lawyer has struggled mightily to order the calling of the witnesses so that together they tell a story that begins at the beginning, moves to the middle, and ends at the end. As you can see, the lawyer has largely but not entirely succeeded. Such is life -- and such are the vagaries of the evidence that witnesses have in their heads and of the legal rules that govern the calling and re-calling of witness.


Now an interview is not an exact replica of a trial. Indeed, there are many differences between trials and pretrial interviews of witnesses. But the requirements of possible trials sometimes do and should cast a backward shadow on pretrial interviews. (Of course, one might wonder how a thing that does not yet exist and may never exist can cast a shadow on an earlier event. But that is a metaphysical question that I leave for another day.) So one might well decide -- and rationally and sensibly so -- that a pretrial interview should be designed in part to ferret out, if possible, evidence that would or might satisfy the requirements for victory at trial. One possible witness interview plan, thus, might look like this: 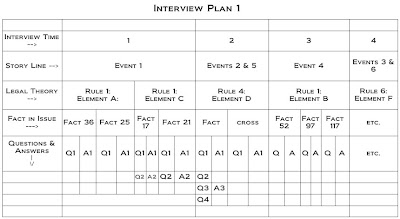 Authenticating Photos: How Many Modes of Manipulation Are There (and, Boy, Are They Easy To Do)

There was perhaps a time when the business of authenticating photographs and images didn't attract much attention. With the advent of the digital age, that lack of interest had better stop. See David Pogue, Photoshop and Photography: When Is It Real?, NYTimes (Feb. 25, 2010)
&&&

Posted by Unknown at 2:26 PM No comments:

It is often said, in different contexts and for different purposes, that the phenomenon of a large amounts of evidentiary details in litigation presents a problem of complexity. But what is complexity?

Complexity is a complex concept. :-) In the the March 2010 edition of The Reasoner Alan Baker of Swarthmore writes:

There is no single, agreed upon definition of what it is to be complex, but rather a cluster of related notions covering both epistemological and ontological aspects of complexity. Of those most relevant to logic are definitions of algorithmic complexity arising from information theory, and applied to strings in some specified formal language. The best-established of this class of definitions is Kolmogorov complexity (KC). The KC of a string of binary digits is measured by the length of its shortest description. Thus the string “101010101010101010101010” can be (fully) described as “12 repetitions of ‘01”’, whereas the most efficient way to describe a disordered string such as “011000101011101101100010” may be to write down the entire string. One implication of the KC measure is that random strings have the highest complexity.

This understanding of the concept of complexity is to some degree (but only to some degree) not applicable to the problem of multitudes of evidentiary minutiae in litigation because what is often wanted is, not a shorthand way to sum up lots of details, but an effective way to bring to mind or keep in mind large amounts of evidentiary minutiae. (There is a good reason why we often want to keep evidentiary details and detailed arguments about such details alive in our minds. I may discuss that point at some other time.) Nonetheless, the information theorist's understanding of complexity is suggestive. It reminds us that a memorable way of classifying -- of quasi-summarizing -- details helps to keep large quantities of details in mind. (Random details are much, much harder to remember.)

Literal visualization of evidentiary details and of arguments from and about evidentiary details sometimes makes a direct attack on the problem of complexity because some types of visualization -- such as Timothy van Gelder's -- are designed to actually keep before the human mind (to some extent) the many details that need to be kept in mind -- to some degree. The emphasis here is in part on modes of representation that are easy to digest -- that are, in that sense, extraordinarily "user-friendly." (In an e-mail message Tim van G once called his method "extrospection." I like his neologism.)

Key point: The mind must be able to flit back and forth, easily and quickly, between different agglomerations of details and different parts (including "evidentiary atoms") of those agglomerations.

Is Racial or Religious Prejudice a Character Trait or Is It Something Else? And Why Should You Care?

One reason why it matters what they're called is that the American "character rule" bars the use (in a trial) of a person's character to show the person's conduct. The American character rule does not bar the use of a person's characteristics, features, feelings, or thoughts when those characteristics are not -- are not considered to be -- character traits, dispositions, or propensities. See the beginnings of a treatment of this point at Is racial prejudice or a similar prejudice admissible to show conduct? in the evidence module of Spindle Law.

I also discussed this question years ago: many years ago I published some words about the question whether prejudice is or is not character. I did so in my revision of the first volume of Wigmore's Treatise. It is always gratifying to see a court acknowledge this -- as did a California court, albeit in an "unpublished" opinion:

A Question Revisited: Is Racial Prejudice or Animus a Character Trait or a Motive for Purposes of the Character Evidence Rule?

African-American Plaintiffs brought a civil action on behalf of themselves and others against their former employer Sara Lee and their former supervisor Wyche for employment discrimination, intentional infliction of emotional distress, and other causes of action. Plaintiffs' claims rested in part on the employer's alleged creation or sufferance of a work environment hostile to African-Americans. Plaintiffs claimed that Wyche created this hostile environment and inflicted emotional distress by racial slurs he made at the workplace.

Leo Bryant (Bryant) and Ronald Amey (Amey) seek reversal of the judgment following the jury trial on their claims for racial harassment and intentional infliction of emotional distress. Their primary claim with respect to the trial is that the court erred in excluding evidence under Evidence Code section 352 of offensive comments by their supervisor, respondent Robert Wyche (Wyche), made at other times, other locations, or about other protected groups."

Is Legal Education of the Public Bad for Us?

David Benke and two other Colorado middle school teachers tackled and disarmed a gunman who was shooting children. "After being subdued, the shooter 'said he was going to sue us,' Benke recalled." (Jeremy P. Meyer, Hailed as hero, math teacher leapt to stop attack, Denver Post (Feb. 23, 2010))
&&&

Posted by Unknown at 8:25 AM No comments:

A Theory of the Trial by Robert Burns

The book A Theory of the Trial (1999) by Robert Burns really is a very interesting and important book even for -- or especially for -- Evidence specialists.

Burn talks much about narrative. Today even the United States Supreme Court talks -- occasionally -- about the role of narrative in the trial. See Old Chief v. United States, 519 U.S. 172 (1997). But the marriage of the law of evidence and of story-telling remains incomplete. Why? Is it because we do not yet know how to harmonize what Burns calls the "Received View of the Trial" (Chapter 1) with a view that takes into account matters such as the evaluative activities of the jury, the importance of theme at the trial, and so on?

Many of us -- probably most of us, thank goodness -- do wish to preserve the trial's emphasis on the search for the "truth." But it is foolhardy to think that an acceptable search for the truth can be achieved if we ignore, for example, many of the ways the jury thinks about and makes sense of what goes on in the courtroom.

In one very interesting section (in Chapter 5) Burns discusses "Features of the Trial Too Basic to Be Noticed and Preliminary Notes on Their Significance." Sometimes one must be a visitor from Mars to notice the profound impact of the familiar. On a visit to Belfast many years ago I noticed how the barristers in a trial paused for some moments after each one of their questions was answered by a witness. I wondered why. Then I noticed a scrivener who, apparently, was writing everything down, laboriously, by hand. I think (but I am not sure) the barristers paused to give the scrivener time to do his job. This, of course, had a noticeable effect on the pace of examination and cross-examination.
&&&

Posted by Unknown at 3:53 PM No comments: