Not An Onion Story:


But others view [Brian Tamanaha's Failing Law Schools] as just the latest overly dire prediction about the fate of law graduates and misplaced finger-pointing over tuition costs.

"Most people in the profession were already concerned about what it costs to get a law degree," said John O'Brien, dean of the New England School of Law and chairman of the ABA's Council of the Section of Legal Education and Admissions to the Bar. "Nobody feels good that tuitions have gone up. But the claim that a law degree is a bad investment doesn't hold water."

O'Brien currently heads the ABA's Council of the Section of Legal Education, whose regulatory mission is to decide whether it's a good idea for John O'Brien to get paid nearly $800,000 per year  $867,000 per year to run a law school with these outcomes for its graduates.  (Just found the 2011 IRS Form 990 for NESL. I apologize to Dean O'Brien for seriously understating what he earned last year for his charitable endeavors).
posted by LawProf at 8:52 AM
&&&
The dynamic evidence page 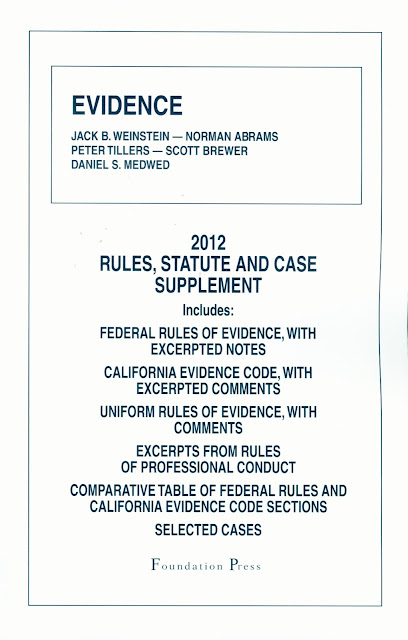 "When New York Police Commissioner Raymond Kelly announced in February 2010 that his agency would begin to video record some interrogations in their entirety, defense lawyers and civil-liberties groups were guardedly optimistic: The test suggested the NYPD may eventually embrace a practice already used by the majority of police forces in the state.

"Some 2 ½ years later, that is not the case. The department now is expanding the pilot program, but minimally: to five precincts from two.


"The NYPD has videotaped some confessions for years. But it has been slow to agree to record a messier aspect of policing: the precarious and confrontational nature of interrogations. Supporters say the practice protects both defendants and investigators, acting as a shield against coercion techniques that can lead to false confessions, and later, against untrue claims that suspects were pressured into admitting guilt.

"A taped confession is 'worthless' to a jury without the run-up, said veteran New York defense attorney Robert Gottlieb. Jurors who see the interrogation can judge the value of a confession and the methods used to get it, he said.

"Currently, 341 of the state's 509 police agencies are recording suspect interviews in some crimes, typically in at least murder and rape investigations, according to the state Division of Criminal Justice Services. By virtue of its pilot program, the NYPD is included among them.

"Nationwide, 18 states and Washington, D.C., mandate the complete recording of interrogations for some crimes, said Rebecca Brown, director of state policy reform for the Innocence Project. A bill requiring either audio or video taping of interrogations in New York has passed the state Assembly but not the Senate."

Posted by Unknown at 8:56 PM No comments:

Email ThisBlogThis!Share to TwitterShare to FacebookShare to Pinterest
Labels: making records of evidence, videotaping of confessions

For decades psychologists have done research to demonstrate that the human animal is not omniscient and makes mistakes -- or, in fancier language, that human beings are subject to "cognitive limitations." This type of research achieved the status of a high art and wide public renown with the publication of  Judgment Under Uncertainty: Heuristics and Biases (1982) by Daniel Kahneman, Pail Slovic & Amos Tversky. Research on human cognitive limitations has accelerated since then. Entire fields -- e.g., behavioral economics --  take human cognitive limitations as their central premise and problem. Legal scholars now routinely cite this type of research, which is now beginning to have a significant influence on the law of evidence. (The prime example of such influence on the law of evidence is the legal treatment of eyewitness identification.)

Research on human cognitive limitations is plainly interesting and informative and some of it should influence the law of evidence. But there are several reason why this sort of research needs to be kept in perspective. One reason is that the general thesis that human beings make inferential errors and have limited cognitive capacity is not exactly new; people have recognized this for thousands of years. But modern research has gone beyond this general hypothesis and has explored how (but less often why) human beings make inferential and deliberative mistakes in specific types of situations and such research has perhaps shown that human beings are more error-prone than they think they are. Nonetheless, we should all be cautious about such research and findings. That is because ordinary human beings are endowed with truly remarkable and sophisticated cognitive equipment and inferential ability. This is suggested and, I think, effectively established, ironically enough, by cutting-edge contemporary research in fields such as neuroscience and artificial intelligence on the electro-physio-magneto-neuro-equipment that we commonly call "the brain." Consider, for example, the following snippet from the post Low Power Chips to Model a Billion Neurons (August 8, 2012) on the blog Next Big Future (original source:  here):

"The average human brain packs a hundred billion or so neurons—connected by a quadrillion (10^15) constantly changing synapses—into a space the size of a cantaloupe. It consumes a paltry 20 watts, much less than a typical incandescent lightbulb. But simulating this mess of wetware with traditional digital circuits would require a supercomputer that’s a good 1000 times as powerful as the best ones we have available today. And we’d need the output of an entire nuclear power plant to run it."

Posted by Unknown at 6:16 PM No comments: