New Issue of International Journal of Evidence and Proof

International Journal of Evidence and Proof

The likelihood-ratio framework and forensic evidence in court: a response to R v T
Keywords: Bayesian; Bayes; Admissibility; Validity; Reliability
Geoffrey Stewart Morrison DOI: doi:10.1350/ijep.2012.16.1.390
(2012) 16 E & P 1
ABSTRACT: In R v T the Court of Appeal concluded that the likelihood-ratio framework should not be used for the evaluation of evidence except 'where there is a firm statistical base'. The present article argues that the court's opinion is based on misunderstandings of statistics and of the likelihood-ratio framework for the evaluation of evidence. The likelihood-ratio framework is a logical framework and not itself dependent on the use of objective measurements, databases and statistical models. The ruling is analysed from the perspective of the new paradigm for forensic-comparison science: the use of the likelihood-ratio framework for the evaluation of evidence; a strong preference for the use of objective measurements, databases representative of the relevant population, and statistical models; and empirical testing of the validity and reliability of the forensic-comparison system under conditions reflecting those of the case at trial.
Is reliability sufficient? The Law Commission and expert evidence in international and interdisciplinary perspective (Part 1)
Keywords: Law and science; Forensic science; Expertise; Admissibility; Daubert;Reform; Trial safeguards; Proof; Opinion; Judging
Gary Edmond DOI: doi:10.1350/ijep.2012.16.1.391
(2012) 16 E & P 30
ABSTRACT: This article offers a critical appraisal of the Law Commission's Report, Expert Evidence in Criminal Proceedings in England and Wales (2011), and related proposals for reform. Drawing upon interdisciplinary research and empirical studies from other common law jurisdictions it suggests that the introduction of a reliability-based admissibility standard for expert opinion evidence, even in conjunction with provision for recourse to court-appointed experts, is unlikely to generate the kinds of changes required to improve the quality of incriminating forensic science and medicine evidence or align criminal justice practice with espoused goals and principles.
Due process and the admission of expert evidence on recovered memory in historic child sexual abuse cases: lessons from America
Keywords: Expert evidence; Recovered memory; Due process; Historic child sexual abuse prosecutions; the United States; Ireland; England and Wales; Law Commission
Sinead Ring DOI: doi:10.1350/ijep.2012.16.1.392
(2012) 16 E & P 66
ABSTRACT: This article reviews the decisions of the US state courts on the admissibility of expert testimony on recovered memory in historic child sexual abuse prosecutions. Unlike their English and Irish counterparts, most US courts scrutinise the reliability of expert evidence on recovered memory. In examining the US decisions the article explores the challenges posed to the criminal process by the contested scientific status of recovered memory theory. It sets out due process arguments why expert evidence on the topic should not be admitted in a criminal trial.

Brain Endowments and the Interpretation of Natural Signs

We have known for some time that bits of evidence function as signs, or clues. (Sherlock Holmes knew this.) But we do not have a good sense of what it is in us or in the cosmos that enables us to take little bits of evidence and extract from them, possibilities, conjectures, and, even, conclusions (inferences) that reach far beyond the evidence that seems to inspire or provoke them. Now we may have some further support for a conjecture about part of the answer. The source of that support? Pigeons.

Birds are excellent navigators. Indeed, they are phenomenal navigators. But scientists have not been able to explain very well how birds, with their teeny-weeny brains, manage their navigational feats of derring-do. It has been suspected that the answer lies in the ability of birds to detect earth's magnetic fields. But no one has been able to demonstrate the part of the anatomy of birds that enables them to detect and interpret magnetic fields. Until now. See James Gorman, Study Sheds Light on How Pigeons Navigate by Magnetic Field NYTimes (April 26, 2012). It appears that there are "cells in a pigeon’s brain that record detailed information on the earth’s magnetic field." Id.
Stunning. So is there also reason to believe that human brains are also soft-wired with devices that facilitate the interpretation of tiny "evidentiary clues," sensory signals, or "natural signs"? It must be so, yes? The conscious mind -- explicit human thought -- is not by itself capable of extracting all the things (some of them "true," or, in any event, indicative or suggestive of true propositions) that human beings, like pigeons, manage to extract from the environment.
This may not be "intelligent design." But it is, in a way, a kind of harmony of the spheres, a harmony between the internal mechanisms of organisms -- such as pigeons and human beings -- and their "environment" (the cosmos). The only really peculiar thing about the human animal is that it is able, sometimes, to also deploy conscious thought -- explicit ratiocination -- to interpret eeny-weeny signs, or hints(?), in its environment.
Or so I speculate.
The mighty pigeon... 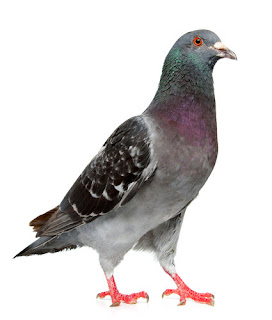 
"The question got Thiel thinking. His thoughts are now incorporated into a course he is teaching in the Stanford Computer Science Department. (A student named Blake Masters posted outstanding notes online, and Thiel has confirmed their accuracy.)

"One of his core points is that we tend to confuse capitalism with competition. We tend to think that whoever competes best comes out ahead. In the race to be more competitive, we sometimes confuse what is hard with what is valuable. The intensity of competition becomes a proxy for value.

"In fact, Thiel argues, we often shouldn’t seek to be really good competitors. We should seek to be really good monopolists. Instead of being slightly better than everybody else in a crowded and established field, it’s often more valuable to create a new market and totally dominate it. The profit margins are much bigger, and the value to society is often bigger, too."

"Now to be clear: When Thiel is talking about a 'monopoly,' he isn’t talking about the illegal eliminate-your-rivals kind. He’s talking about doing something so creative that you establish a distinct market, niche and identity. 'You’ve established a creative monopoly and everybody has to come to you if they want that service, at least for a time.'

"His lecture points to a provocative possibility: that the competitive spirit capitalism engenders can sometimes inhibit the creativity it requires.

"Think about the traits that creative people possess. Creative people don’t follow the crowds; they seek out the blank spots on the map. Creative people wander through faraway and forgotten traditions and then integrate marginal perspectives back to the mainstream. Instead of being fastest around the tracks everybody knows, creative people move adaptively through wildernesses nobody knows."