Some Evidence of a Cause of the Concentrated Trial: A Lesson from Japan

In a radical change to Japan's modern justice system, lay judges will now be involved in trials of serious crimes: Six lay judges will sit on the bench alongside three professional judges at trials.

One beneficial side effect of the changes will likely be a faster criminal justice process, as the current practice of spreading trials out over months, and sometimes years, will end.

“Judges sometimes work on dozens of cases at a time, sitting one day a month on each trial, spending the time between reading case documents,” [Hiroshi] Kawatsu [a trial attorney who heads the Japan Federation of Bar Associations’ (JFBA) Research Office for Judicial Reform] explained. The need for lay judges to return to their normal lives will make this impractical, and Japan is thus adopting a more focused approach to pre-trial procedures and evidence.

Posted by Unknown at 1:39 AM No comments:

The first [trial], involving a 72-year-old man charged with murdering a neighbor, is scheduled for Aug. 3 to 6 at the Tokyo District Court.

Katsuyoshi Fujii allegedly stabbed Haruko Bun, 66, a South Korean resident of Japan, to death May 1 on a road in Adachi Ward.

Fujii has allegedly told the police he lost his temper after some plastic bottles filled with water in front of his home were knocked over by a motorcycle owned by Bun's son.

Many people place plastic bottles around their garages, gardens and planters under the false belief that light reflected from them will scare off stray cats.

In his article "In Two States, a Lower Bar for Conviction" Adam Liptak of the New York Times writes:

A unanimity rule [for jury verdicts in criminal trials] would seem to reinforce the requirement that prosecutors prove their cases beyond a reasonable doubt. Two jurors out of 12, if you do the math, represent about 16 percent of the panel. That’s a fair amount of doubt.

This eminently silly statement proves that you can do sums and fractions and still produce ridiculous propositions. For example, would Mr. Liptak conclude that if a jury of twelve convicts, it is certain that the accused is guilty? Or does he think that each juror's amount of doubt should be measured and then averaged to determine how much doubt there "was"? Perhaps a successor to C.P. Snow should write a book called THE THREE CULTURES. There are people who are in the sciences. There are people who are in the humanities. Then there are people who...

Robert McNamara, who died today, also knew how to do his sums and fractions back in the 1960s. But his computations (which involved the number of enemy fatalities in the Vietnam war) were, for various reasons, largely meaningless.

The rest of Mr. Liptak's article is more interesting (and sensible).

If Justices Scalia and Thomas cling to their original intent mantra, they will rule that the Sixth Amendment requires unanimous jury verdicts for convictions in criminal trials. The question is whether three other Justices will endorse this bottom line.

Incidentally, wouldn't Scalia and Thomas also have to endorse a unanimity requirement and twelve member juries for the trial by jury that is guaranteed by the Seventh Amendment in some civil trials?

Posted by Unknown at 2:47 PM No comments:

MarshalPlan (my evidence marshaling software) now has a complete set of evidence marshaling stacks.
In particular, MarshalPlan now has a "probative value" stack (as well as recently-developed stacks for (i) assessment of the credibility of witnesses, (ii) laying out the sequence of important actions and events during prelitigation investigation, during pretrial investigation, and during the process of proof at trial, and (iii) developing and assessing narratives, stories).
The new "probative value" stack supports the development of inferential argument based on evidence and the assessment of the force of such argument.


1. In the application itself there is only sparse explanation of the theories underlying the evidence marshaling strategies that are embedded in MarshalPlan 3.0.


To get that some of that theory and those explanations (but not all of them) you will have to (i) read the article I mentioned earlier, A Theory of Preliminary Fact Investigation, and (ii) wander about my personal web site. If you want a truly comprehensive theory-laden explanation of MarshalPlan, you will have to invite me to give a leisurely talk (preferably on a tropical island or some other attractive venue).

2. A few buttons and links don't work. When that happens, try other buttons and links. (Otherwise resort to expletives. You have my permission.)
3. MarshalPlan 3.0 is not set up to be linked to a database. This is a most serious deficiency.


But -- in my defense -- I repeat: MarshalPlan 3.0 is NOT a prototype of a working software application, suitable for use in real-time contexts.
MarshalPlan is, instead, an elaborate visual illustration of some of the directions that development of software for marshaling evidence in legal settings should take.


Having made this important disclaimer, I now add that MarshalPlan is creeping ever closer to being something akin to a genuine software prototype suitable for real-world and real-time use. The biggest bridge will be crossed when I manage to make the forthcoming "web-resident" version of MarshalPlan database-friendly. I must also find a way to standardize many of the fields in which users are invited and expected to add "data" such as dates and names. Please give me about six months to get these things done.

The dynamic evidence page
Coming soon: the law of evidence on Spindle Law
Posted by Unknown at 3:14 PM No comments:

Assessing Inference by Picturing It 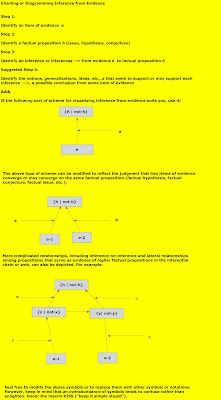 Posted by Unknown at 3:48 AM No comments: