The Scientific Origins of the Polygraph Test

In the early 1900s, William Moulton Marston, an undergraduate at Harvard, invented the precursor of the modern polygraph. The device recorded breathing rate by means of a pneumatic rubber hose wrapped around the subject's chest and a blood-pressure cuff encircling the upper arm. In a charming footnote to polygraph history, Marston later became a comic-book writer and, under the pen name of Charles Moulton, created Wonder Woman, an action heroine who wore a a "Golden Lasso of Truth" around her waist. When villains were lassoed with her magical version of the pneumatic hose, they were forced to tell the truth.

This history (or "prehistory") makes me Wonder how the polygraph test ever escaped universal ridicule.

I could not disagree more with Senator Rand Paul on matters such as government support for medical care for the poor but on government electronic surveillance, he is spot on: Rand Paul, Big Brother Actually Is Watching Us, Monitoring hundreds of millions of phone records is an extraordinary invasion of privacy Wall Street Journal (June 2013).
&&&
The dynamic evidence page

Update: How to download my evidence marshaling software (MarshalPlan)

In the years following my seven(!)-year NSF-supported collaboration with David Schum, I continued to tinker with MarshalPlan. I did so by both modifying and adding "stacks," or files. (Each stack corresponds to an evidence marshaling strategy, or method.) The most recent iteration of the evidence marshaling software is MarshalPlan 5.5.

A few years ago  I began to make MarshalPlan available via the internet.  However, since I am not a programmer and since I lack many basic computer skills, I have not managed to devise a single method of accessing or download in MarshalPlan 5.5 that works for everyone. This is why I lay out two or more ways for you to download MarshalPlan. One of these downloading methods should work for you. 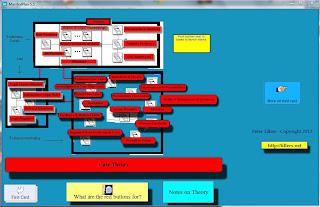 1. The current iteration of MarshalPlan -- MarshalPlan 5.5 -- is not a prototype of a working application suitable for real-time and real-world use. Far from it! However, MarshalPlan 5.5 goes beyond just scratchings (text) that explain how an evidence marshaling application might work. Even so, it is not far from the truth to say that MarshalPlan is mainly an elaborate visual illustration of some of the directions that development of software for marshaling evidence in legal settings should take. But, but ... MarshalPlan 5.5 is a bit more than an illustration of possible future directions for research and development. MarshalPlan as it now stands is useful for pedagogical (i.e., teaching) purposes. Moreover, MarshalPlan is creeping ever closer to being something akin to a genuine software prototype suitable for real-world and real-time use.

2. In MarshalPlan 5.5 there are only brief explanations of some of the evidence marshaling strategies found there. Other marshaling strategies, however, are described and explained more fully. For a comprehensive account of the thinking that went into MarshalPlan, please see the readings mentioned above. If you want a truly comprehensive theory-laden explanation of MarshalPlan, you will have to invite me to give a leisurely talk (preferably on a tropical island or some other attractive venue).

4. MarshalPlan 5.5 is not set up to be linked to a database. This is a most serious deficiency for any possible real-world use in a context such as law practice.


Try one or more of the following methods to view and play with MarshalPlan 5.5:

1. MarshalPlan on the web: If you use the now-ancient Firefox 3.x and you are willing to accept a plug-in, you may be able to view MarshalPlan 4.0 in your (Firefox) browser. To try this, click this link.

2. You can download MarshalPlan 5.5 for use on a Windows computer by  going to http://tillers.net/MarshalPlan.5.5/ and opening the subfolder "Windows" and then clicking on MarshalPlan 5.5exe.

3. As of 6/11/2013,  you will very probably not be able to run the MarshalPlan 5.5 downloaded in this way (see par. 2 above) on an Apple computer. The Apple OS probably still strips a thus-downloaded MarshalPlan of the ability to run on Apple computers. Sorry! {Take your grievance if any to the paternalistic Apple Corporation, which likes closed worlds, particularly those that it controls.} But there is a solution! Send an email message to peter@tillers.net and ask me to share a relevant DropBox folder with you. I will happily oblige.

Posted by Unknown at 4:41 AM No comments:

I have (finally) joined the ranks of users of speech recognition software (Dragon - Legal Edition). I hope this gambit works. (I think it will.)

Posted by Unknown at 4:01 AM No comments: 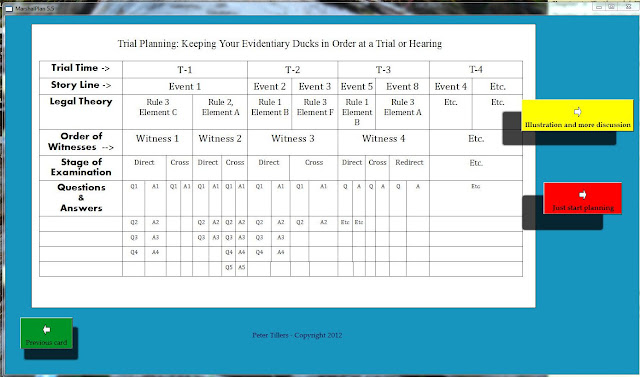 Posted by Unknown at 3:54 AM No comments:

Email ThisBlogThis!Share to TwitterShare to FacebookShare to Pinterest
Labels: planning for evidence at trial

Jack Shafer on Government Collection of Reams of Personal Data

"Faster than you can say evaporation-condensation-precipitation, I expect this week’s exposés to produce additional investigations that will produce more leaks and further scoops about our digital records. This will now fuel new cycles of reporting, leaks and scoops — and another, and another — as new sources are cultivated and reportorial scraps gathering mold in journalists’ notebooks gain new relevance and help break stories.

"Greenwald’s storm will continue to rage because, I suspect, the story won’t be limited to just phone records or Web data. Ultimately, it will be about the government’s pursuit of all the digital breadcrumbs we produce as necessary byproducts of day-to-day life — and phone records and Web data are just a small part.

"Bank records, credit history, travel records, credit card records, EZPass data, GPS phone data, license-plate reader databases, Social Security and Internal Revenue Service records, facial-recognition databases at the Department of Motor Vehicles and elsewhere, even 7-Eleven surveillance videos comprise information lodes that are of equal or greater value to the national security establishment than phone and Web files. It doesn’t sound paranoid to conclude that the government has reused, or will reuse, the interpretation of the Patriot Act it presented to the secret FISA court in its phone record and Prism data requests to grab these other data troves.

"Lest I sound like a Fourth Amendment hysteric, I understand there’s nothing automatically sacrosanct about any of the digital trails we leave behind. Lawful subpoenas can liberate all sorts records about you, electronic or otherwise.

"What’s breathtaking about these two government surveillance programs that the Guardian and theWashington Post have revealed is that they’re vast collections of data about hundreds of millions of people suspected of no wrongdoing and not part of any civil action. Defending the phone-record cull, National Intelligence Director James R. Clapper explained this week that smaller sets of information aren’t very useful in screening for and identifying “terrorism-related communications,” hence all must collected."

Posted by Unknown at 3:40 AM No comments: