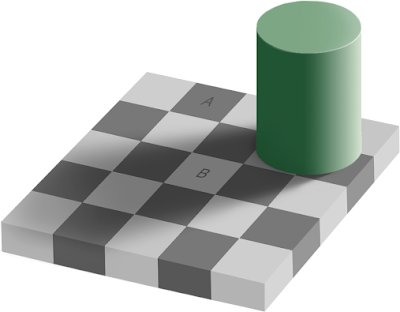 This is a file from the Wikimedia Commons

Are squares A and B different colors or are they the same color?

For discussion see the Wikipedia article

Why does the illusion work? See Explanation

But take note of the following important (and atypical) moral by Adelson: "As with many so-called illusions, this effect really demonstrates the success rather than the failure of the visual system. The visual system is not very good at being a physical light meter, but that is not its purpose. The important task is to break the image information down into meaningful components, and thereby perceive the nature of the objects in view."

Aha! Human beings are not idiots after all. Even their sense organs work pretty well -- indeed, amazingly well, all things considered. (This is my moralizing.)

The title of the newspaper article almost says it all: Elaine Sciolino, New Leaders Say Pensive French Think Too Much, NYTimes (July 22, 2006). The furor was provoked thus:

“France is a country that thinks,” she told the National Assembly. “There is hardly an ideology that we haven’t turned into a theory. We have in our libraries enough to talk about for centuries to come. This is why I would like to tell you: Enough thinking, already. Roll up your sleeves.”

But the disdain for reflection may be going a bit too far. It certainly has set the French intellectual class on edge. “How absurd to say we should think less!” said Alain Finkielkraut, the philosopher, writer, professor and radio show host. “If you have the chance to consecrate your life to thinking, you work all the time, even in your sleep. Thinking requires setbacks, suffering, a lot of sweat.”

Bernard-Henri Lévy, the much more splashy philosopher-journalist who wrote a book retracing Tocqueville’s 19th-century travels throughout the United States, is similarly appalled by Ms. Lagarde’s comments.

“This is the sort of thing you can hear in cafe conversations from morons who drink too much,” said Mr. Lévy, who is so well-known in French that he is known simply by his initials B.H.L. “To my knowledge this is the first time in modern French history that a minister dares to utter such phrases. I’m pro-American and pro-market, so I could have voted for Nicolas Sarkozy, but this anti-intellectual tendency is one of the reasons that I did not.”

On the theory that one good attack on French theorizing deserves an attack on derivative French theorizing, I quote the contrarian Australian social commentator (and mathematician) James Franklin (Quadrant 43 (4) (April, 1999), somewhere between pp. 16-21):

It is customary for philosophical scholars of a continental bent to declare themselves for one or other European author, commentary on whose works provides the mass of the scholars' own output. In [the Department of] General Philosophy [at the University of Sydney], first choice of guru was Louis Althusser, author of For Marx Reading Capital Lenin and Philosophy etc. Embarrassingly, a Sydney student visited Paris, secured an interview with Althusser, and brought back bad news for his Australian disciples. He had never heard of them, and when their interpretation of his work was explained, he denounced it as a travesty. The movement of his thought, he said, was away from ideology, and he had this message: ``Go and tell the comrades down there, on my behalf, not to confuse philosophy with ideology nor to reduce philosophy to political agitation.'' In any case, a few years later, Althusser murdered his wife. It was time to move on. ...

I once suffered from a similar disease. My third year paper at law school was about (my view of) Hegel's view of the duty to die for the state. My LL.M. thesis was about Kant's philosophy of law. I later abandoned such epiphenomenal scholarship, only partly because my affection for such stuff was premature in the American legal academy. (But it is far from clear that man- and woman-kind has benefited from my change of heart and mind.)

Yet, yet, ... -- yes, I am forced to confess -- one sometimes learns a few things by being epiphenomenal. For example, it is not well known that Bertrand Russell (despite his mature aversion to German Idealism) studied neo-Hegelianism. Charles Peirce also pondered Hegel and the neo-Hegelians. Nietzsche did so as well. For a while it appeared that 19th and 20th century philosophy was not much more than a series of footnotes to adverse reactions to Hegelianism.

Indeed, I think that Kant's theory of "judgment" (Urteil) may have something interesting to say about contemporary theories about the nature of evidential inference. More about this later. I promise!

Posted by Unknown at 1:13 AM No comments:

Judging and Misjudging Guilt and Innocence

Adam Liptak has a TimesSelect Column (July 23, 2007) in the NYTimes about a study of how well or badly the US criminal justice system ferrets out and corrects criminal convictions that rest on factual mistakes. The column focuses on a study by Professor Brandon L. Garrett of the University of Virginia School of Law. (The TimesSelect column provides a link to the copyrighted study, which is to be published in the Columbia Law Review.) A forthcoming study by Professors Samuel Gross (University of Michigan) and Barbara O’Brien (Michigan State) is also mentioned, but not discussed at length.

According to Liptak, one conclusion to be extracted from the Garrett study is that "[t]he courts performed miserably in ferreting out the innocent."

To the extent that Garrett's study discusses the rate of wrongful conviction of the innocent -- thus far I have only skimmed Garrett's paper --, Michael Risinger's paper (scroll down in the page to reach the link) should be consulted.

Liptak asserts, in passing, that "rape [is] the classic crime in which DNA can categorically prove innocence." This is a familiar mistake. But sophisticated observers such as Liptak should not make it. DNA cannot "categorically" prove innocence -- anymore than it can "categorically" prove guilt. For example, it is well known (or it should be well known) that (i) the presence of one male's semen in a woman's vagina does not rule out the possibility that another man raped that woman (whether the man who was the source of the semen found in the woman and tested did so or not) and (ii) a laboratory may have tested the wrong semen sample. Is it necessary to recite such possibilities? The fact that in particular circumstances the results of a DNA test may be highly persuasive evidence of innocence does not change the fundamental point: DNA evidence is NEVER conclusive of ANYTHING. Tiresome. And a dangerous misunderstanding.

Liptak notes that Garrett concluded that "[t]he leading cause of the wrongful convictions was erroneous identification by eyewitnesses, which occurred 79 percent of the time." What are we to make of this statistic? Does it matter how frequently eyewitness identifications resulted in the conviction of the guilty? (I assume Garrett discusses this point. [Let me emphasize that I have not yet carefully scrutinized Garrett's study. So I really am NOT saying or even intimating that Garrett has not discussed the questions I raise here.])

Note: unless one demands absolute factual certainty (which is unattainable under any circumstances), on the basis of the above-quoted statistic alone -- or on the basis of that statistic and the additional statistic that in 1/4 of the wrongful convictions eyewitness identification was the sole evidence --, on the basis of such statistics alone one would not conclude (I would think) (i) that eyewitness identification evidence should be barred or (ii) that eyewitness evidence alone should never suffice for a conviction. (However, further arguments and considerations might justify the latter conclusion -- the conclusion that eyewitness evidence [e.g., of just one eyewitness] should not be suffice for a conviction. [Again, I want to make crystal clear that I am NOT asserting that Garrett does not discuss such issues. I have not yet studied his study.])

I have lightly skimmed SOME parts of the Garrett study. The part of the study I enjoyed most (due, surely, in no small part to my personal theoretical prejudices) is the part in which Garrett stresses the importance of pretrial fact investigation and the substantial resources that are required (including, I would say, the diligence, discipline, and imagination of defense counsel) to conduct effective pretrial fact investigation.
Posted by Unknown at 11:48 PM 2 comments: