How Much and How Well Can a Two-and-One-Half-Year-Old Child Understand and Remember about What She Has Seen and Heard?

The daughter of defendant and his missing wife was two-and-one-half years old at the time of her mother's disappearance.

Nothing happened for more than 15 years. However, in 2006 defendant was indicted for the murder of his wife. In 2007 he was tried for that crime.

Although defendant's daughter, by then a teenager, testified at the 2007 trial, she testified she could remember nothing about her mother's disappearance.

The counselor and the psychiatrist were allowed to testify to the incriminating statements the daughter made to them when she was three (3), four (4) & five (5) years old -- about what she supposedly said she had supposedly seen and heard when she was two-and-one-half years old.

Defendant was convicted of second degree murder. His conviction was affirmed by the Wyoming Supreme Court in September 2008. In December 2008 defendant filed a petition for certiorari in the U.S. Supreme Court.

The opinion of the Wyoming Supreme Court dealt with a variety of interesting evidentiary and constitutional issues, including (1) whether the daughter's lack of memory rendered her "unavailable" for purposes of the Confrontation Right as spelled out by Crawford v. Washington, 541 U.S. 36 (2004) (see also the pre-Crawford Confrontation Clause decision United States v. Owens, 484 U.S. 554 (1988)), (2) whether video-conferenced testimony by a witness with a medical disability satisfied defendant's constitutional right of confrontation, (3) whether the trial court's exclusion of third party perpetrator evidence violated defendant's due process right to present a defense, and (4) whether the statements of a three, four, or five year old declarant fall within Wyoming's hearsay exception for statements made for purposes of medical diagnosis or treatment.

However, the Wyoming Supreme Court did not consider the question (perhaps because it was not asked to do so) whether the statements of a three, four, or five year old child about matters that the child may have seen and heard when the child was two-and-one-half years old had so little probative value that their admission violated defendant's due process right to a fair trial.

Memories of the travesties involving charges in the 1980s and 1990s of mass sex abuse in child day care centers should raise some questions about this case. For example, apart from the question of how much and how well a two-and-half-year old child can understand and remember various kinds of matters, one wonders whether the counselor and the psychiatrist who counseled and interviewed the daughter believed or suspected at the time that defendant had killed the daughter's mother. Did the counselor and the psychiatrist unwittingly plant recollections in the mind of the daughter? The following extracts from the opinion deal, albeit only tangentially, with this important question:

a. Admissibility of Hearsay Statements Under W.R.E. 803(4)

The record discloses that defense counsel objected to the testimony on the ground that the child's statements were not admissible for the truth of the matter asserted, i.e., that Mr. Bush killed Mrs. Bush, but only for the purpose of showing what information Ms. Gordon [the counselor] and Dr. Eicher [the psychiatrist] relied upon in arriving at a diagnosis. Initially, therefore, the defense did not object to admission of the statements but only to the purpose for which they were admitted. The district court withheld ruling until the State established foundation for the statements during direct examination of Ms. Gordon. At that point, counsel approached the bench and the State argued that the foundation had been laid for admitting the statements under W.R.E. 803(4). Defense counsel asserted the testimony was not admissible because the purpose of Ms. Gordon's counseling was to assist the police with the criminal investigation; therefore, it did not fall within the medical treatment exception to the hearsay rule. Defense counsel asked to voir dire Ms. Gordon and the district court granted the request.

During the voir dire, Ms. Gordon testified that she was in contact with the police department and the district attorney's office while she was treating the child. She testified that her purpose for those contacts was to find out what had happened to the child before she went to live with her grandparents. Ms. Gordon denied that she was assisting the police department or the district attorney's office with their investigation into Mrs. Bush's disappearance and testified that her only reason for seeing the child was to help her.

After the voir dire, counsel again approached the bench and defense counsel argued that Ms. Gordon had served a dual purpose--she treated the child and assisted the police with the criminal investigation. Defense counsel asked for a limiting instruction telling the jury that the statements were admitted for the purpose of showing what information Ms. Gordon relied upon in treating the child but not for the truth of the child's statements that Mr. Bush killed Mrs. Bush. The district court ruled as follows:

I think the statements can come in as an exception to the hearsay rule under 803, sub (4). I can envision circumstances where a witness is sent to medical treatment to get around the rule; and in that case, I think that kind of subterfuge would not allow the statements to be used substantively. There is no indication here. Ms. Gordon has indicated her primary purpose was diagnosis and treatment of [the child]. If those statements were used secondarily for law enforcement purposes, that does not render them not available under the exception. So I'm not going to give the limiting instruction. I'm ruling they may come in and be considered by the jury for substantive purposes.

Pursuant to [Wyoming Rule of Evidence 803(4)], we have held that a child's statements to a medical professional or professional counselor may be admitted into evidence provided the proper foundation is laid--that the child's statements were consistent with the purposes for which the witness became involved with the child, and the witness relied on the statements in connection with diagnosis and treatment of the child. Simmers v. State, 943 P.2d 1189, 1197-1198 (Wyo. 1997).

Ms. Gordon testified that she began seeing the child at the request of her maternal grandparents, who were concerned about her behavior after her mother's disappearance. Her grandmother testified that the child was having nightmares, was angry and scared and was losing weight. She said she sought treatment for the child because she believed the child needed help.

Dr. Eicher testified that DFS referred the child to her for evaluation during the custody matter. She testified that she did not conduct a forensic interview for purposes of criminal or custodial proceedings. She saw the child three times and diagnosed her as having severe post-traumatic stress disorder as a result of having seen her mother hurt by her father. In arriving at her diagnosis, Dr. Eicher relied primarily on the child's statements and play during the sessions.

Posted by Unknown at 9:02 PM No comments:

Is factual inference just a matter of intuition? Always? If you think so, dear Reader, what inference does your untutored intuition lead you to draw from the following image: 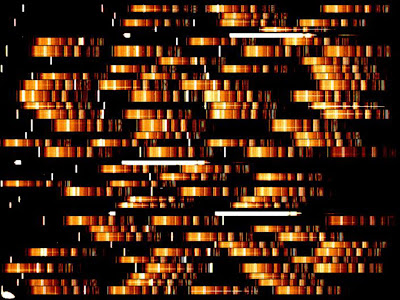 By the way: what is the image? See this web page.

The battle against junk forensic science is never-ending. It is perhaps also a losing battle: the seductions of junk science are apparently overwhelming to a substantial segment of the popular mind. This discouraging thought was deposited into my mind by the news that we will now have the privilege of watching a TV show -- "Lie to Me" -- inspired by Paul Ekman's "science" of detecting lies by facial expressions and other bodily cues.

I will try to keep an open mind. But all of my warning bells suggest we are about to witness another spasm of pseudoscience. I only hope that jurors and juries will have enough common sense to resist using such pseudoscience in their deliberations. (I am less optimistic that police departments will have an equal degree of common sense.)

Posted by Unknown at 2:11 AM No comments: