The Role(s) of Analogy in Reasoning

John F. Sowa, a proponent of conceptual graphs, believes that analogy plays a key role in all or almost all reasoning:

Analogies can support informal, case-based reasoning:
● Long-term memory can store large numbers of previous experiences.
● Any new case can be matched to similar cases in long-term memory.
● Close matches are ranked by a similarity measure.

Formal reasoning is based on a disciplined use of analogy:
● Induction: Generalize multiple cases to create rules or axioms.
● Deduction: Match (unify) a new case with part of some rule or axiom.
● Abduction: Form a hypothesis based on aspects of similar cases. 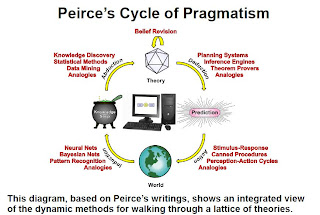 It's here: the law of evidence on Spindle Law. See also this post and this post.
Posted by Unknown at 3:06 AM No comments:

Email ThisBlogThis!Share to TwitterShare to FacebookShare to Pinterest
Labels: analogy

A Cautionary Note about Research in Psychology

The fraud case described in this NYTimes article has raised important questions about research in psychology that reach beyond the problem of fraudulent data.

Snippets from the article:

A well-known psychologist in the Netherlands whose work has been published widely in professional journals falsified data and made up entire experiments, an investigating committee has found. Experts say the case exposes deep flaws in the way science is done in a field, psychology, that has only recently earned a fragile respectability.

The psychologist, Diederik Stapel, of Tilburg University, committed academic fraud in “several dozen” published papers, many accepted in respected journals and reported in the news media, according to a report released on Monday by the three Dutch institutions where he has worked: the University of Groningen, the University of Amsterdam, and Tilburg. The journal Science, which published one of Dr. Stapel’s papers in April, posted an “editorial expression of concern” about the research online on Tuesday.

Researchers in psychology are certainly aware of the issue [unclear antecedent]. In recent years, some have mocked studies showing correlations between activity on brain images and personality measures as “voodoo” science, and a controversy over statistics erupted in January after The Journal of Personality and Social Psychology accepted a paper purporting to show evidence of extrasensory perception. In cases like these, the authors being challenged are often reluctant to share their raw data. But an analysis of 49 studies appearing Wednesday in the journal PLoS One, by Dr. Wicherts, Dr. Bakker and Dylan Molenaar, found that the more reluctant that scientists were to share their data, the more likely that evidence contradicted their reported findings.

“We know the general tendency of humans to draw the conclusions they want to draw — there’s a different threshold,” said Joseph P. Simmons, a psychologist at the University of Pennsylvania’s Wharton School. “With findings we want to see, we ask, ‘Can I believe this?’ With those we don’t, we ask, ‘Must I believe this?’ ”

But reviewers working for psychology journals rarely take this into account in any rigorous way. Neither do they typically ask to see the original data. While many psychologists shade and spin, Dr. Stapel went ahead and drew any conclusion he wanted.

Email ThisBlogThis!Share to TwitterShare to FacebookShare to Pinterest
Labels: reliability and validity of research in psychology

Adam Liptak of the New York Times provides a useful account of oral argument before the Supreme Court about constitutional limitations on the admissibility of eyewitness identifications (for the prosecution) in criminal trials.


Some of the more interesting comments by the Justices:


“Why is unreliable eyewitness identification any different from unreliable anything else?” (Justice Scalia)

“Eyewitness testimony is not the only kind of testimony which people can do studies on and find that it’s more unreliable than you would think,” Justice Kagan said.

“What about all the other safeguards that you have?” she asked. “You can ask the judge to tell the jury, ‘Be careful; eyewitness testimony is often unreliable.’ You can point that out in cross-examination.”

“You can say something about it in your summation to the jury,” she went on, adding that the rules of evidence, as opposed to the Constitution, also allow the exclusion of some kinds of unreliable evidence.

“Why aren’t all those safeguards enough?” Justice Ginsburg asked.


The justices also mused about other forms of evidence and information, including fingerprints, DNA, crystal balls, tea leaves and information obtained through torture. But they seemed persuaded by a lawyer for the federal government, Nicole A. Saharsky, who argued in support of state prosecutors in the case.

“Taking the question of reliability away from the jury,” Ms. Saharsky said, “would be a very big change in our system.”


The primary point of excluding eyewitness identifications that were prompted by the police, said Michael A. Delaney, New Hampshire’s attorney general, was to deter police misconduct rather than to address unreliable evidence more generally.

Justice Kagan disagreed. “Well, it’s both,” she said. “The court has certainly talked about deterrence, but the court also has very substantial discussions in all of these opinions about reliability. And from the criminal defendant’s point of view, it doesn’t really much matter whether the unreliability is caused by police conduct or by something else.”

It's here: the law of evidence on Spindle Law. See also this post and this post.
Posted by Unknown at 3:05 AM 2 comments: