Another (Painful) Example of the Importance of Evidence Marshaling

The second generation of the New Evidence Scholarship focused on mathematically-laden problems of scientific evidence (e.g., DNA evidence) and on problems of factual inference that seem tractable to statistical analysis.

A key premise of this third generation of NES is this: rigorous analysis (including mathematical analysis) is required to design a tool that promotes or supports or facilitates logical inference by ordinary people about ordinary [non-scientific] problems but the tool thus produced must not require such ordinary people to do mathematical computations.

Two major practitioners of NES-3rd are Douglas Walton and Tim van Gelder. (There are others.) Of course, the third approach to factual inference was, so to speak, there all along, at least in a germinal form: Wigmore's charting method (which appeared in print in 1937) anticipated key ingredients of the third approach. William Twining refurbished and modernized Wigmore's charting notations (and was among the very first to defend the importance of Wigmorean-style charting of evidential inference). David Schum married Wigmorean charting with mathematics and produced probabilistic inference networks. Working from left field (i.e., not starting within NES-1st or NES-2nd), Tim van Gelder is now effectively taking this progression to the final and critical stage. He is doing so by emphasizing how important it is that math- and logic-generated charts, diagrams, pictures, images, and, in general, conceptual tools present and portray problems of inference in a way that is intuitive and natural and intelligible to "ordinary" human beings (whose reasoning capacities are in fact extraordinary). 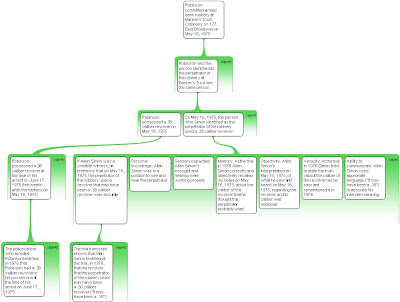 The Brilliance of False Memories

The difference between false memories and true ones is the same as for jewels: it is always the false ones that look the most real, the most brilliant.

Posted by Unknown at 7:44 AM No comments: