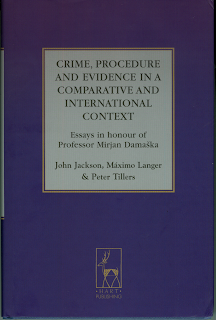 The following book has just been published:

consulting on investigation strategy and the law of evidence

After class, [Professor Kelly] Jolley and I walked across Auburn’s mostly deserted campus and into town for lunch. It was oppressively hot and humid; Jolley wore a fraying straw boater to keep the sun off his face. Over pizza and iced tea, I asked him if he ever wondered whether his style of teaching might be inappropriate for a large state school like Auburn — if the cost of his approach is that he’s teaching to the few rather than the many. “My view is that you really fall into a trap when you start allowing what you believe about your students to dictate how you teach your discipline,” he answered. “Too often these days we end up setting up our courses in light of what we believe about our students and we end up not teaching them. At best, we end up housebreaking them.”

In Jolley’s ideal world, every student would catch the philosophy flame, but he knows this will never happen. He says that philosophy requires a certain rare and innate ability — the ability to step outside yourself and observe your own mind in the act of thinking. In this respect, Jolley recognizes that his detractors have a point when they criticize his approach to teaching. “It’s aristocratic in the sense that any selection based on talent is aristocratic,” he told me. “I know it offends everyone’s sense of democracy, this idea that everyone’s equal, but we all know that’s just not true.”

Perhaps the dispute between Jolley and his critics boils down to how you define great teachers. You typically think about them as being devoted, above all, to their students. Jolley says his first priority is to philosophy itself. “I care about the discipline of philosophy more than the academic fate of any individual student — and I think I should,” he said. “Otherwise I’m just a baby sitter who occasionally breaks into syllogism.”

Jolley's notion that his philosophical endeavors in the classroom ought to be pitched to the best students rather than to average students is perhaps questionable. But his commitment to rigor is admirable. I, any event, admire his courage and his quite-literal idealism.

One has the sense or hope that Prof. Jolley thinks the "best" students are the most inquisitive. And with that thesis it is hard to disagree.