Perhaps the New York Times will someday be sued for hiring an executive who is wilfuly indifferent to child sexual abuse by employees in his organization? It would be a bit like being in the position of the Archdiocese of Boston. 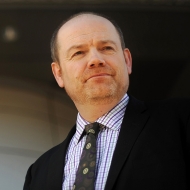 For the last few months, Britain has been consumed by its own version of the Penn State scandal — allegations that the recently deceased BBC children's television presenter and national institution Jimmy Savile was a pedophile who was tacitly enabled by his employer for decades. The story has been mostly ignored in America, but it could affect the closest thing this country has to the BBC, the New York Times. Mark Thompson, the former BBC director general hired by Times chairman and publisher Arthur Sulzberger Jr. to run the newspaper in August, has faced intense scrutiny about what he knew about an unaired news segment examining the allegations against Savile. The report was killed while Thompson was still in charge of the British TV network. Thompson first denied knowing anything about it, but then confessed in the Times he had indeed heard about the report at a cocktail party after it was killed.

Many have questioned whether it’s plausible that Thompson didn’t know in advance about the existence of a TV report by and about his own network, especially one that could badly damage the BBC's reputation. And if he didn’t know about it, why not?

If Thompson seemed curiously incurious, so too does Sulzberger Jr.  The family steward of the Times has said he fully stands behind Thompson, defending him with the same vigor he did reporter Judith Miller after the Iraq War. ...