Tools for the Study and Management of Evidence 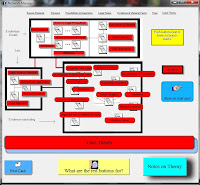 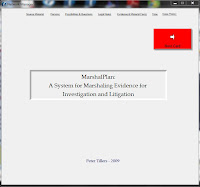 In some recent posts I have talked about the importance of conceptual tools. I have been riding this hobby horse for quite some time. Years ago I wrote:

One last word, Brother Lash. I am pleased that the procedures described in The Hypercard(tm)-based Spiritual Exercises of Saint David of Virginia45 [n. 45. For a discussion of this system see Peter Tillers & David Schum, A Theory of Preliminary Fact Investigation, 24 U.C. Davis L. Rev. 931, 944-48 (1991).] strike you as simple and familiar. Since those exercises were intended for the ordinary pilgrim, we wanted them to be user-friendly. Moreover, the spiritual exercises we describe are really only tools. The best tools, of course, are easy to use. It is certainly interesting and reassuring to hear that other pilgrims have made use of exercises like those in our software prototypes. (We have also heard such reports.) Needless to say, we did not invent the methods that pilgrims have used since days of yore to discipline and purify the mind that seeks the bliss of Knowledge; these methods, we believe, are natural to practically Everywoman and Everyman. Thus, if our computer-based network of possible spiritual exercises performs a service, it does so mainly by making it easier for the pilgrim to bring familiar spiritual methods more clearly to mind and to decide how to arrange and combine them to best effect for her particular spiritual situation. Thus, the computer can make even spiritual labor more productive and efficient.

I must admit I am pleased you know what the Prophet (and Saint) David and I are about; unlike some other people, you do not make the mistake of thinking that our spiritual exercises are rituals or rites. As you know, Brother Lash, some Believers hold that ritual has an intelligence of its own and that the mindless repetition of ritual can produce Knowledge. We are grateful that you did not accuse us of pursuing or purveying that sort of unnatural and artificial intelligence. However, I fear you may have made a mistake of the opposite sort. I sense that the simplicity of the procedures and methods in The Hypercard(tm)-based Spiritual Exercises of Saint David of Virginia disturbs as well as charms you; you seem to hint that our exercises lack sophistication. If that was your subtextual intimation, Brother Lash, I fear you have lost sight of the distinction between spiritual exercises and theology. While our tool for organizing the movement of the inner spirit flows from our theology, the tool we have developed is not itself theology or theoria. (It's just a tool.) By the same token, the simplicity of our method of organizing spiritual exercises does not mean that the theoria that produced it is simple or simplistic. I am sure that you will agree that it takes a subtle theology to produce an efficient user-friendly computer-embedded Hypercard(tm)-based network of reciprocally interactive spiritual exercises.

Posted by Unknown at 9:22 PM No comments:

Mr. Solomonoff [widely regarded, along with Marvin Minsky and John McCarthy, as one of the principal founders of Artificial Intelligence] went on to pioneer the application of probability theory to solving artificial intelligence problems. But in the 1960s and 1970s he was ahead of his time, and the approach initially had little impact on the field. More recently, probability theory has caught on among artificial intelligence researchers; it is now the dominant approach.

Posted by Unknown at 8:54 AM No comments:

When I was in college, varieties of positivism were all the rage. So I took it as gospel (so to speak) that "ought" cannot be derived from "is." Then I went to law school. There I found law teachers who regularly seemed to extract legal oughts from (legal) facts (i.e., legal precedents & the like).

Those law teachers of mine generally seemed to be rather intelligent fellows. And most of them didn't seem to be troubled by the "conflation" (as we say today) of "is" and "ought" in, say, tort law or in the law of property.

Well, then: How are we -- how am I -- to discern and describe the "structure of proof in modern American trials"? (I have said I would write about this topic someday. So I need to answer this question.)

Years ago I swore off Hegel. (I am in distinguished company. For example, Bertrand Russell did so, so did Friedrich Nietzsche, so did Charles Saunders Peirce -- and so did many other 19th and early-20th century luminaries -- after being immersed in the Hegel-Geist.) But -- nonetheless -- I think this: One cannot explain the "structure" of society or law without identifying and discussing the "purposes" of parts of a society or of parts of a legal system.

But where are such purposes to come from?

Am I to take them out of my own solipsistic, narcissistic head?

No. That won't do. (After all, Hegel's rationalistic [effective] solipsism is why I renounced Hegel and people like Hegel. [Beyond that, his logic stinks.])

Purposes must come from facts in the world.

Here is a sort of solution: Hegel must be empiricized. Or perhaps re-Aristotelianized.

That is to say: Perhaps by observing some things as they are, we can see some of their functions -- and, having done that, perhaps it is not inappropriate -- or at least not wildly irrational -- for us (some of us) to regard some such functions as admirable functions, our functions, viz., our (social and perhaps even individual) purposes.

There are functions everywhere. Natural organisms are full of functions. (Aristotle noticed this a very long time ago. [I am not, of course, speaking of mathematical functions.])

Societies (it has often been said) are analogous to organisms. Be that as it may, different parts of society seem to have some functions. Perhaps, by close observation, one can identify some of the functions of at least some parts of some societies -- and perhaps one can call some of those functions "purposes."

Perhaps -- furthermore -- there are some relatively invariant functions. For example: Perhaps some human electro-neuro-biological processes have pretty much the same functions everywhere on the current version of our planet earth.

And perhaps there are some constraints -- e.g., time -- that are with us at all times (so to speak).

But contingency is there too, no? For example, some legislator has a bad day and her staff puts clumsily-drafted language into a bill that neither she nor any other legislator actually reads. Voila: a rape shield law has been amended.

So what do we have? This: a mixture of fact, accident, necessity, function, and purpose.

But this framework -- as little as it is -- is -- in any event -- what it is: a framework. And perhaps that's good for something.

Enough! It's time to get on (again) with the treatise on proof. I'll report on my progress (or lack thereof) later.

"If T.H. Huxley was ‘Darwin’s bulldog’, the Oxford emeritus professor for the public understanding of science, Richard Dawkins, has been called his unmuzzled rottweiler..." (Steven Shapin, The Darwin Show London Review of Books (Jan. 7, 2010).)

Shapin observes that some of Darwin's admirers say that Darwin's theory of evolution "explains everything" in biology. Shapin comments, "That is, however, a step too far for some otherwise sympathetic scientists. As the geneticist Steve Jones put it, Darwin Year has encouraged ‘vulgar Darwinists’ in their already souped up tendency misleadingly to treat evolutionary biology as ‘a universal solvent that can sort out the most recalcitrant problems of society, consciousness, politics, literature and more’."

In Stanislaw Lem's The Investigation (Adele Milch, trans., 1992; first Polish ed., 1959) corpses mysteriously begin disappearing from mortuaries in and near London. A statistician is brought in to help with the investigation. The statistician concludes that the solution to the riddle of the disappearing corpses lies in the fact that the product of the time and distance between any two consecutive incidents multiplied by the difference in temperature at any two sites of consecutive incidents of disappearing corpses yields a constant.
&&&